Discover Tomar - Things To Do in Tomar

Set along the margins of the Nabão river, Tomar is one of Portugal’s last Templar towns. Looming over it is the Convent of Christ, a World Heritage site founded in the 12th century by the Knights Templar Order. As you arrive in Tomar, it’s impossible not to catch a glimpse of this astonishing monument and the lush trees surrounding it.

The convent may be the town’s crown jewel, but its charming features don’t end there. There’s the old town with its pedestrian-friendly streets, beautiful churches and two large parks that deserve a visit, one along the riverside and the other attached to the convent.

Every four years Tomar hosts the ​ Festa dos Tabuleiros, a summer festival where locals parade with tall crowns on their heads made up of bread and flowers. But even if you don’t make it in time, the town has plenty of attractions to keep you busy all year round.

Below is an itinerary of what to do in Tomar, including where to eat and where to stay.

What to do in Tomar

Drive past the Aqueduto dos Pegões

On your way to Tomar, you can pass through the Aqueduto dos Pegões. This impressive aqueduct with 180 arches connects the village of Pegões to the Convent of Christ in Tomar. Completed in the 17th century, it helped supply water to the monks living in the convent at the time. The structure is six-kilometres long, and if you’re not afraid of heights, you can take a stroll along the top, which goes up to 30 metres. 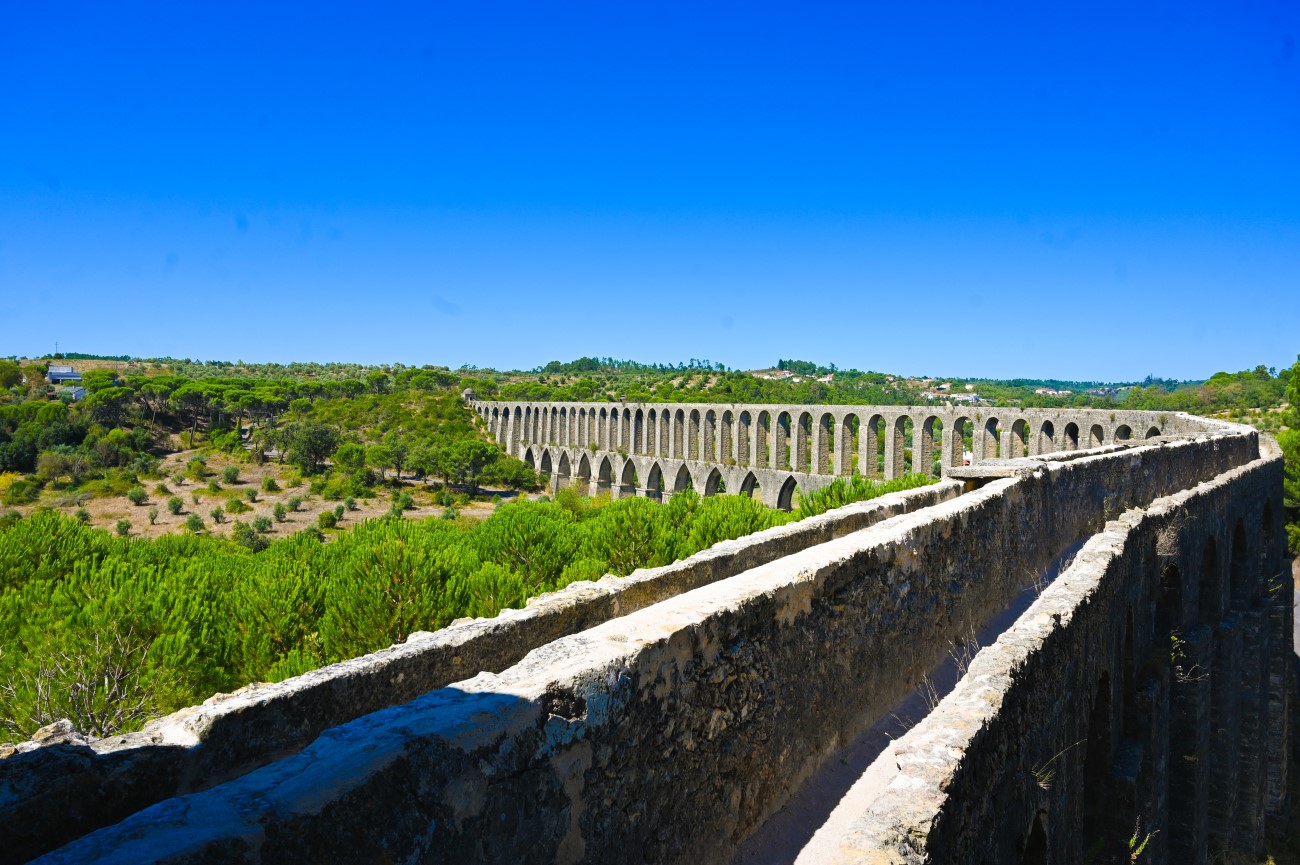 Explore the Convent of Christ and the Castle

Standing high above the town, the Convent of Christ is one of the best attractions in Tomar. For nearly seven centuries, Tomar was in the hand of the Knights Templar Order, and it was them who erected the imposing convent you see today.

Founded in 1160, it continues to amaze visitors with its stone-carved walls and beautiful cloisters lined with tiles. Walking around it, you’ll notice a mix of architectural styles ranging from the Gothic to the Renaissance era.

In the same grounds is the old Templar castle, one of the many defensive structures in Portugal built by the Order to protect the region from Moorish attacks. 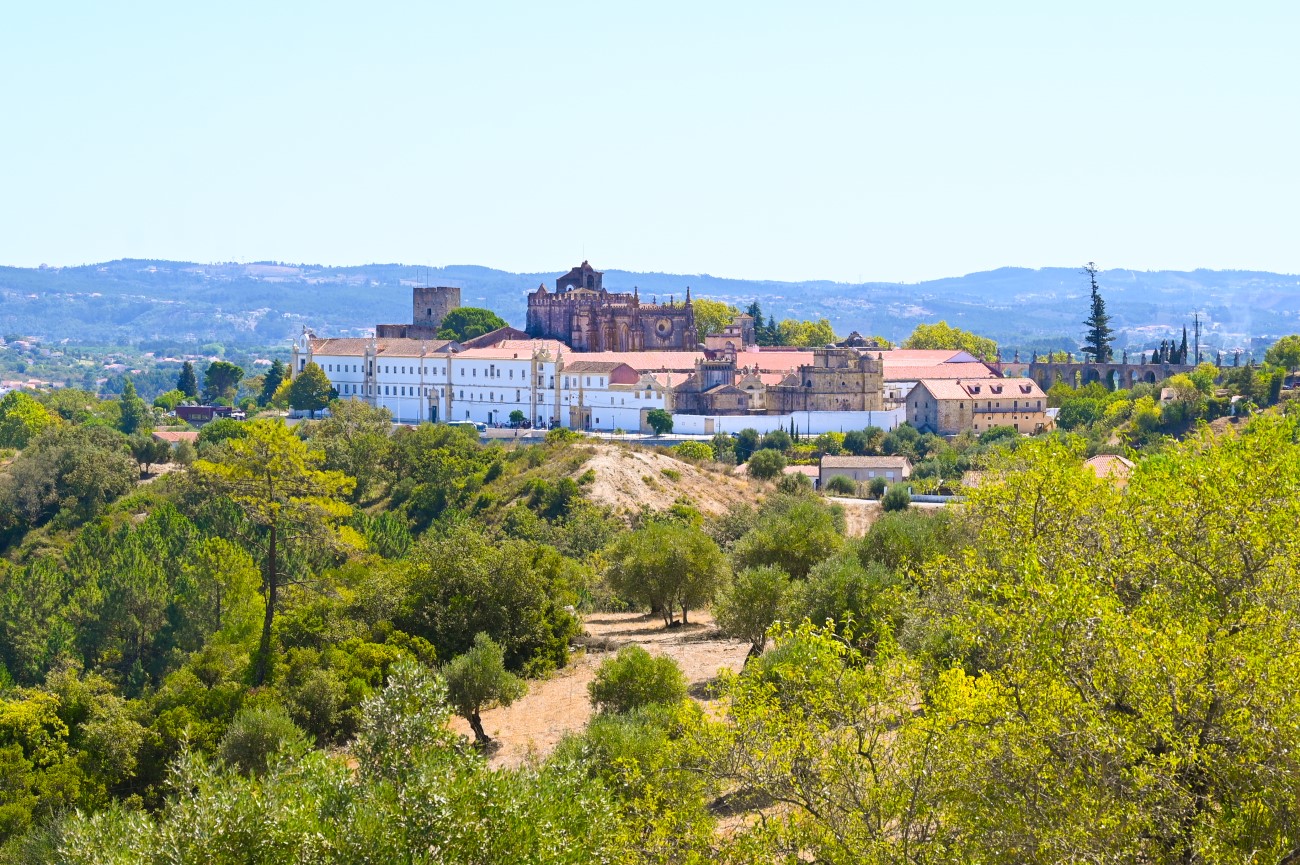 Convent of Christ and the Castle, Tomar, Portugal 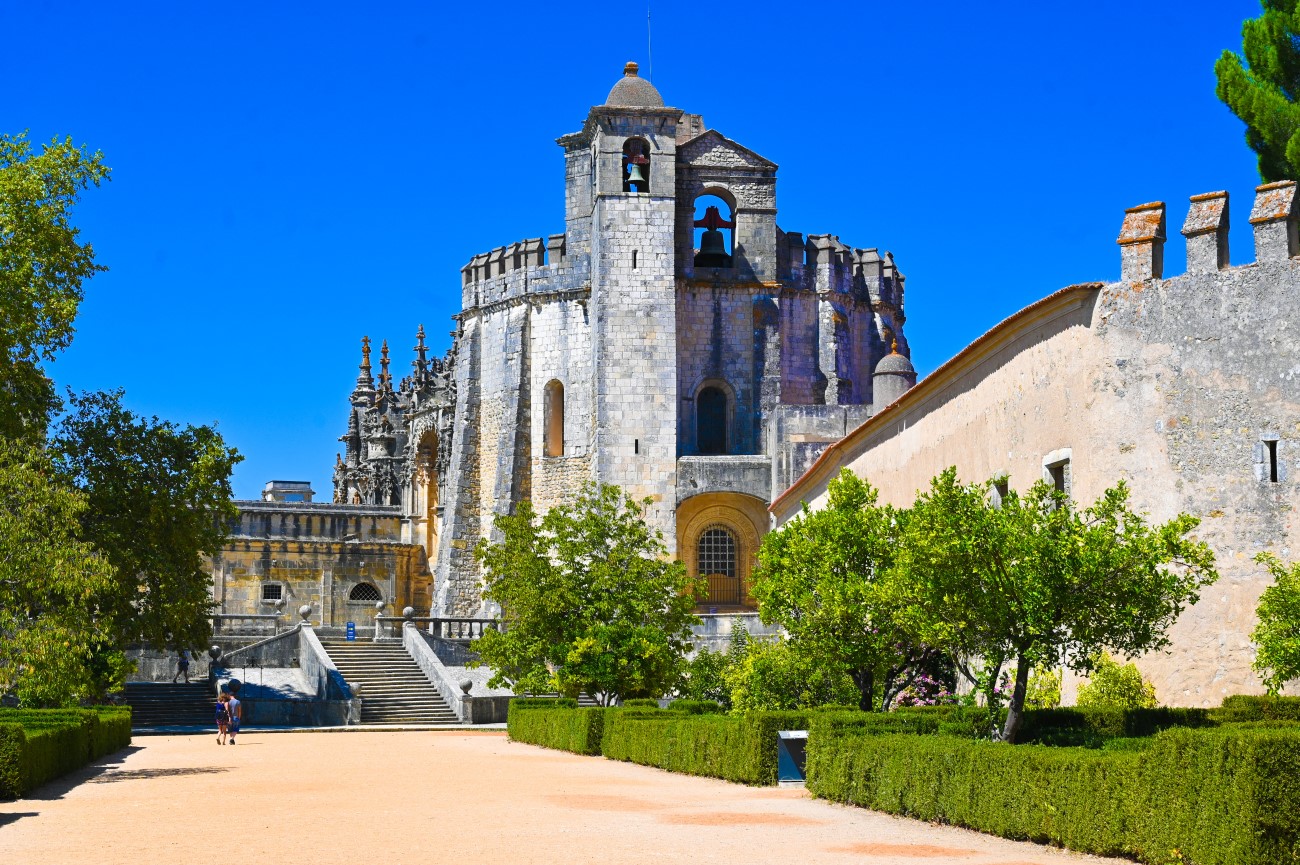 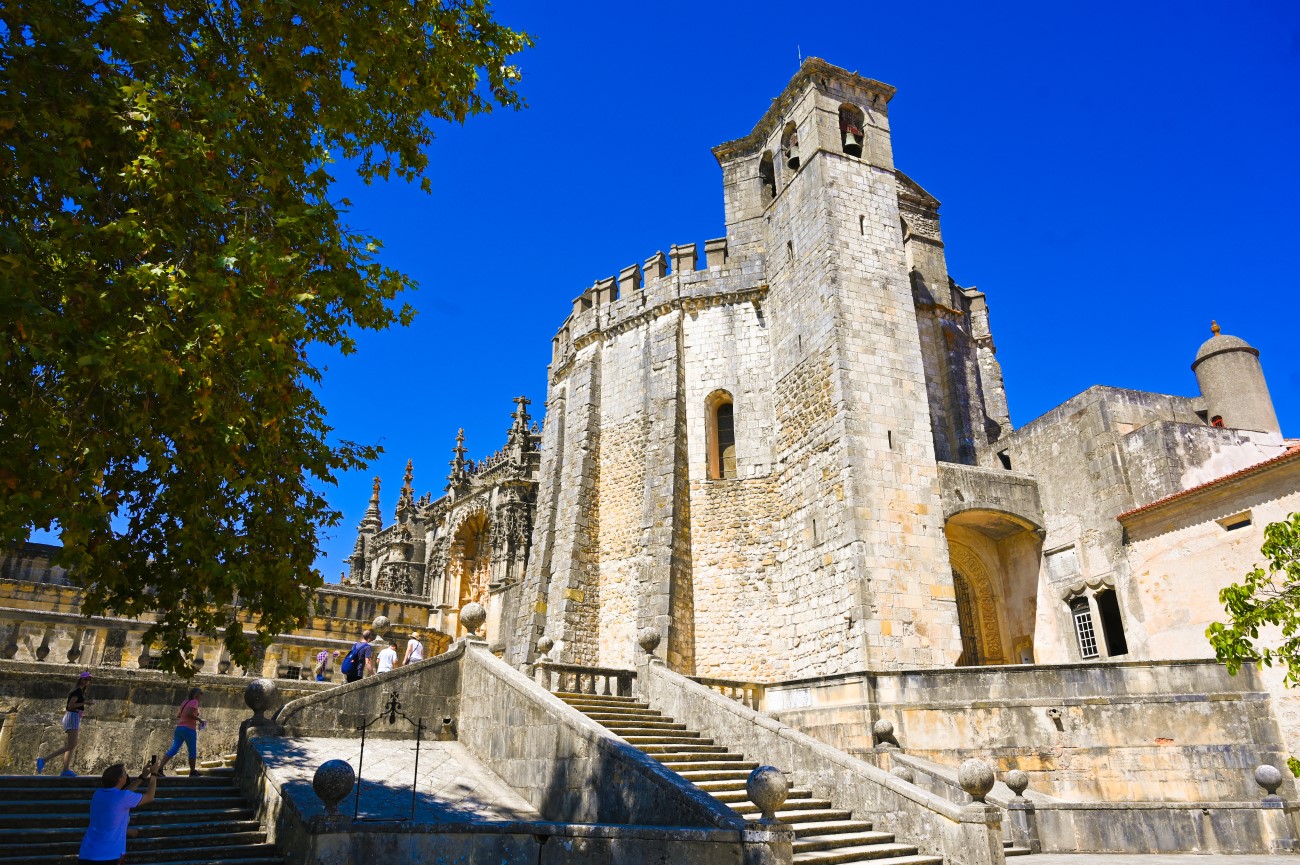 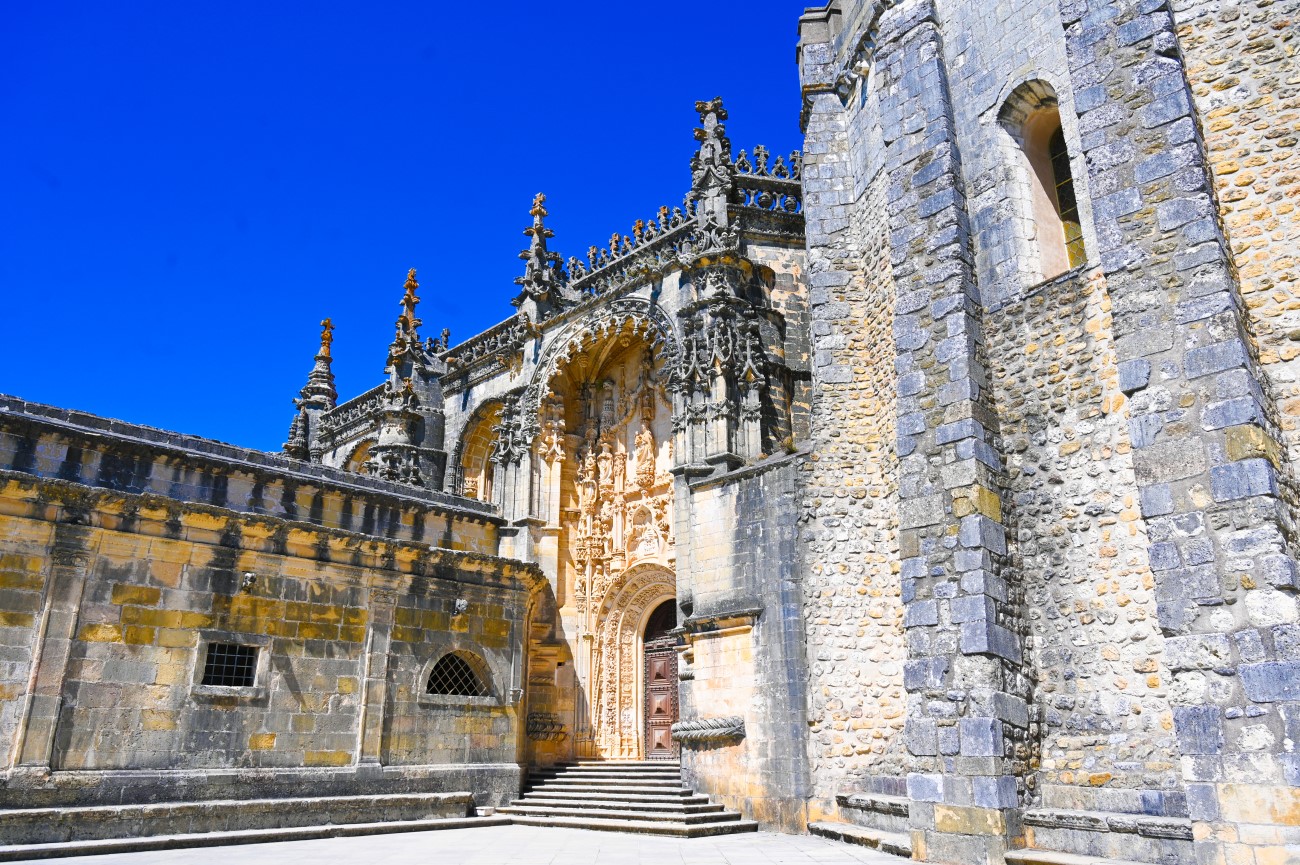 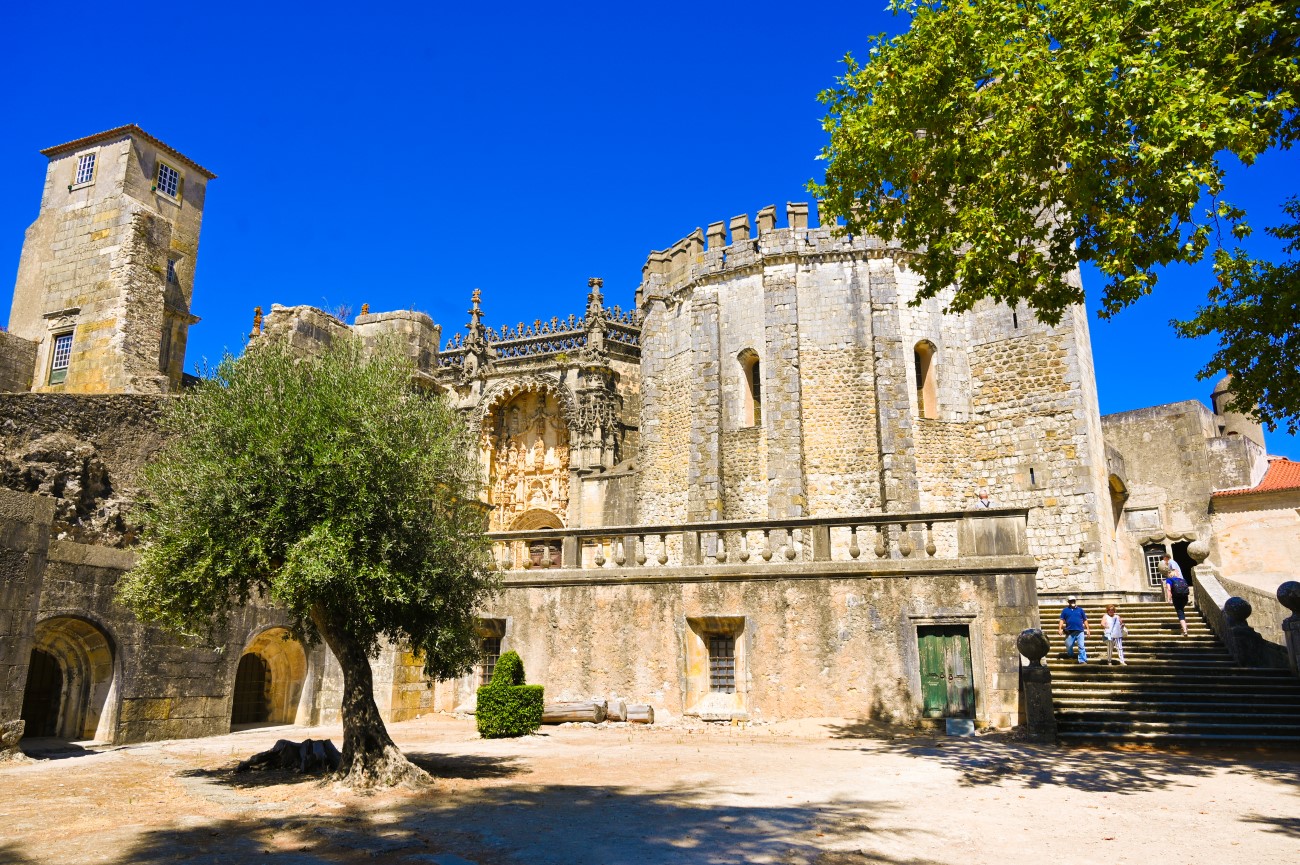 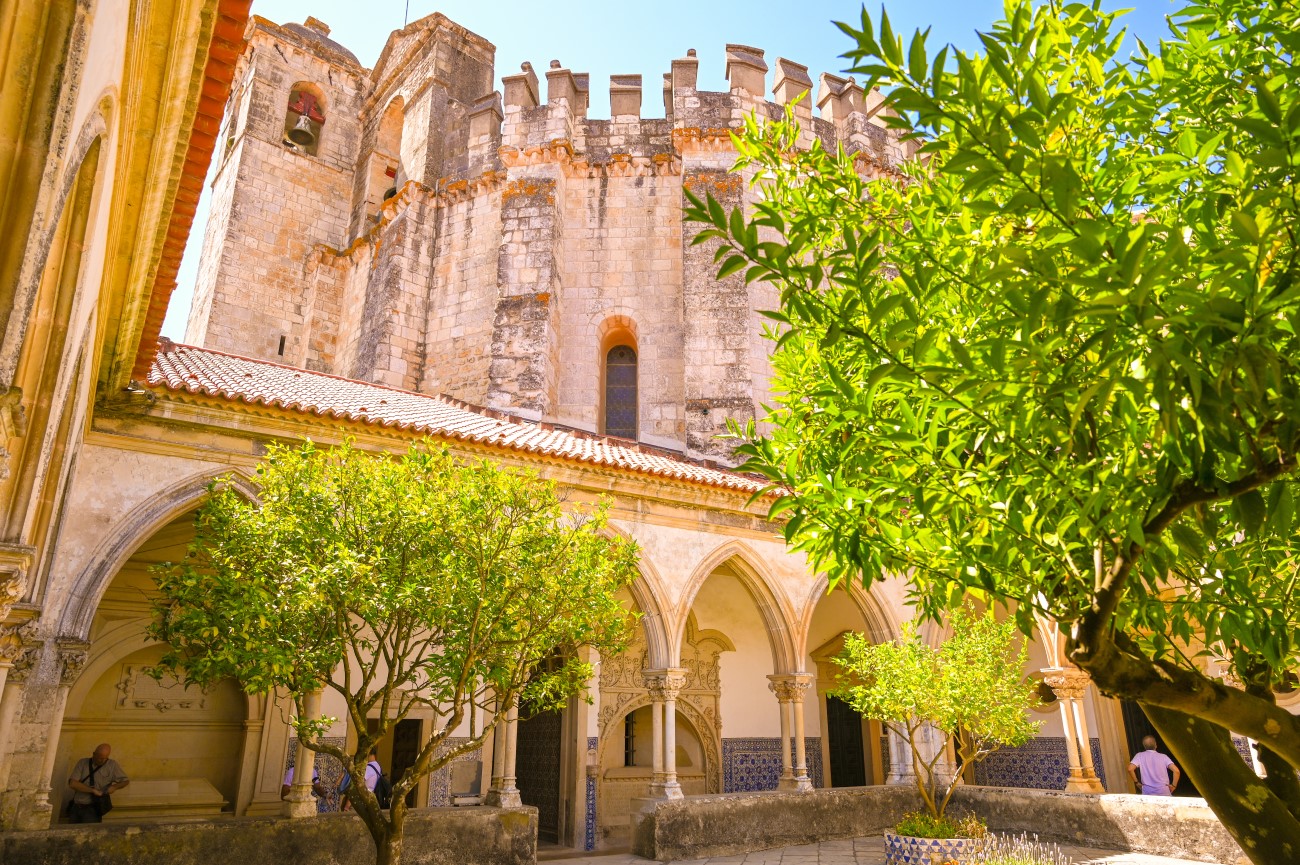 Cloister of the Cemetery, for knight burial, at Convent of Christ - Tomar, Portugal 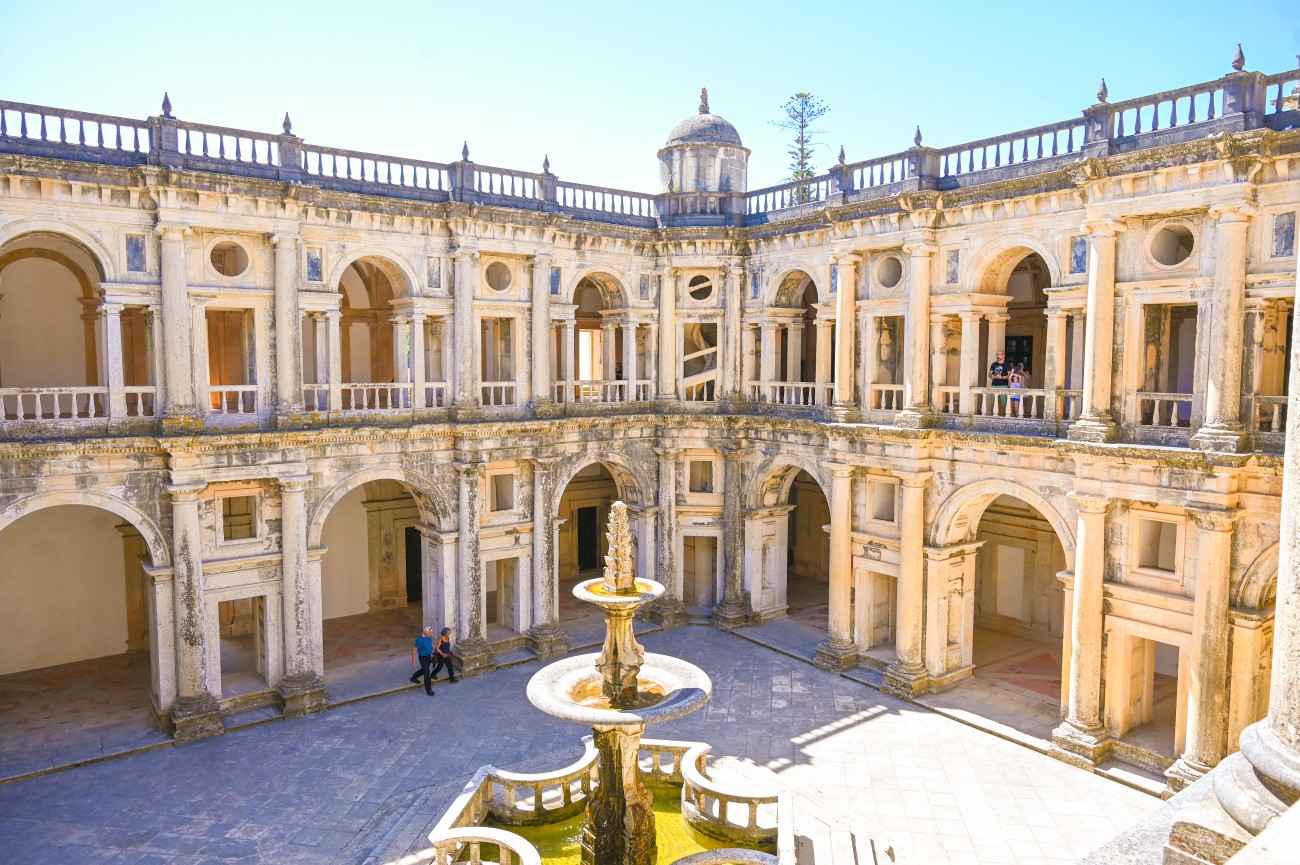 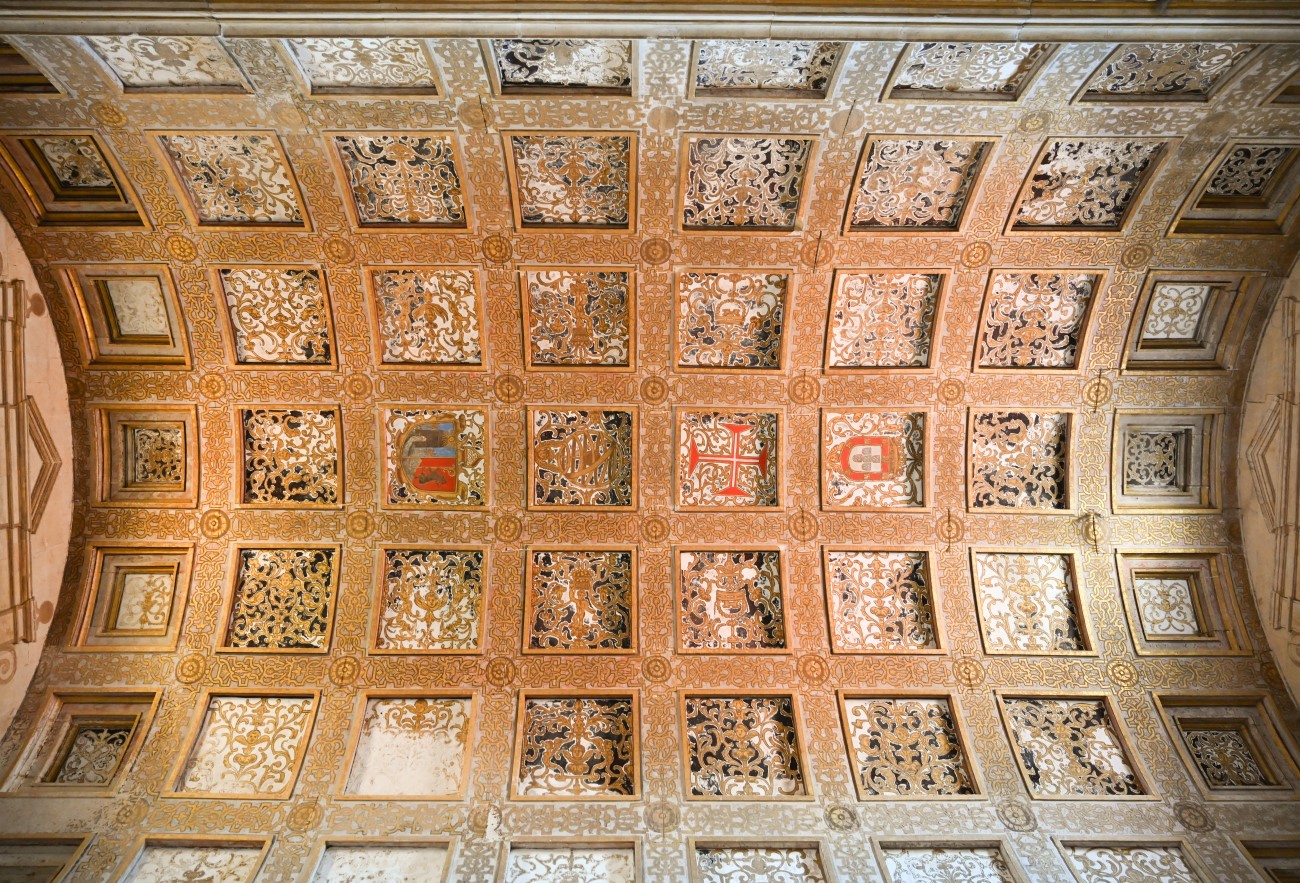 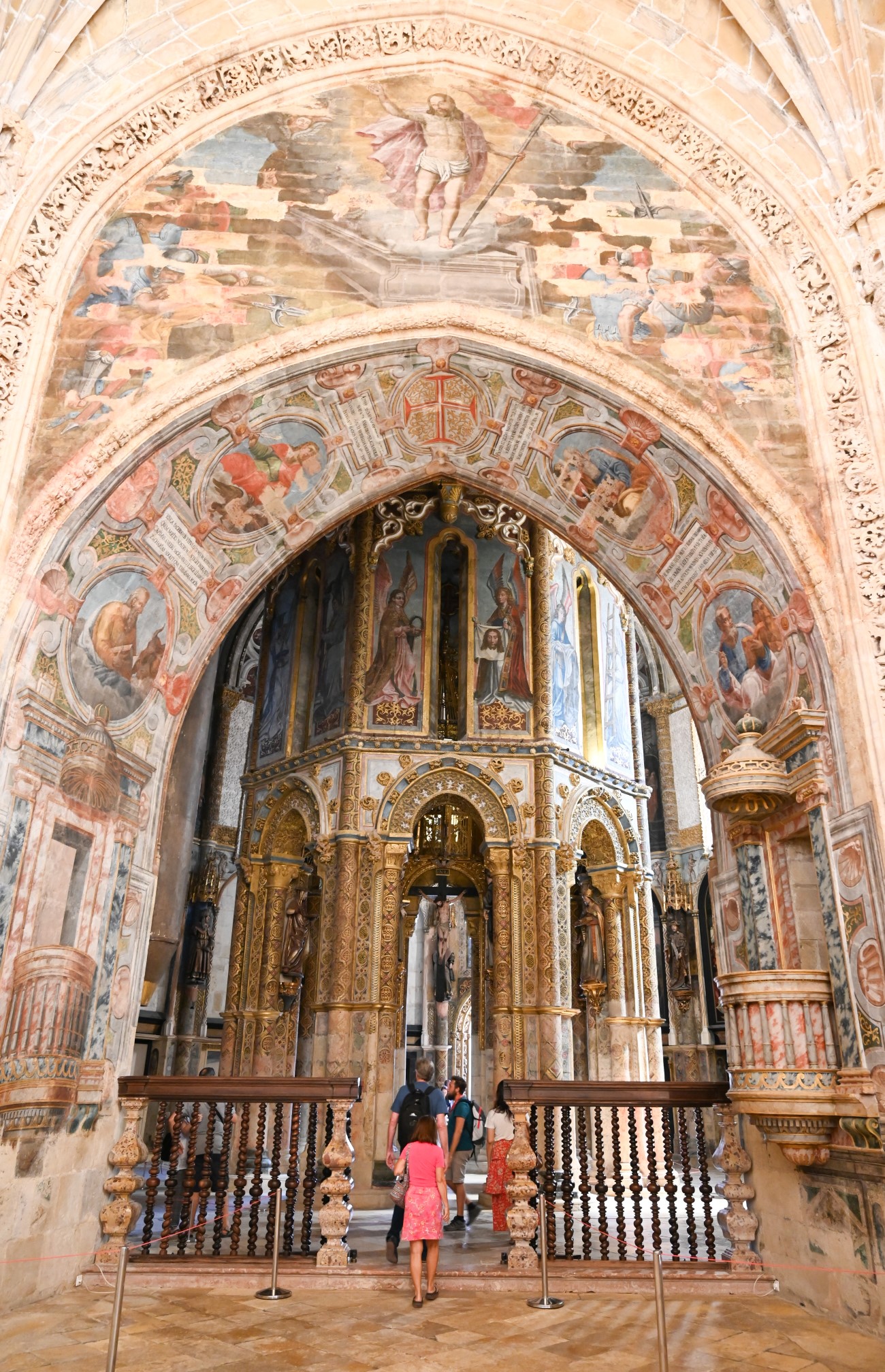 Get lost at the Mata Nacional dos Sete Montes

Stretching for 39 hectares, Mata Nacional dos Sete Montes is a large park that links the convent of Tomar to the old town. At the bottom part, there are curated gardens with trimmed shrubs and stone vases, and at the top, a woody path lined with cypress and oak trees. As you walk through the park, keep an eye out for the ​ Charolinha, a small replica of the Convent towers standing amid a water tank. 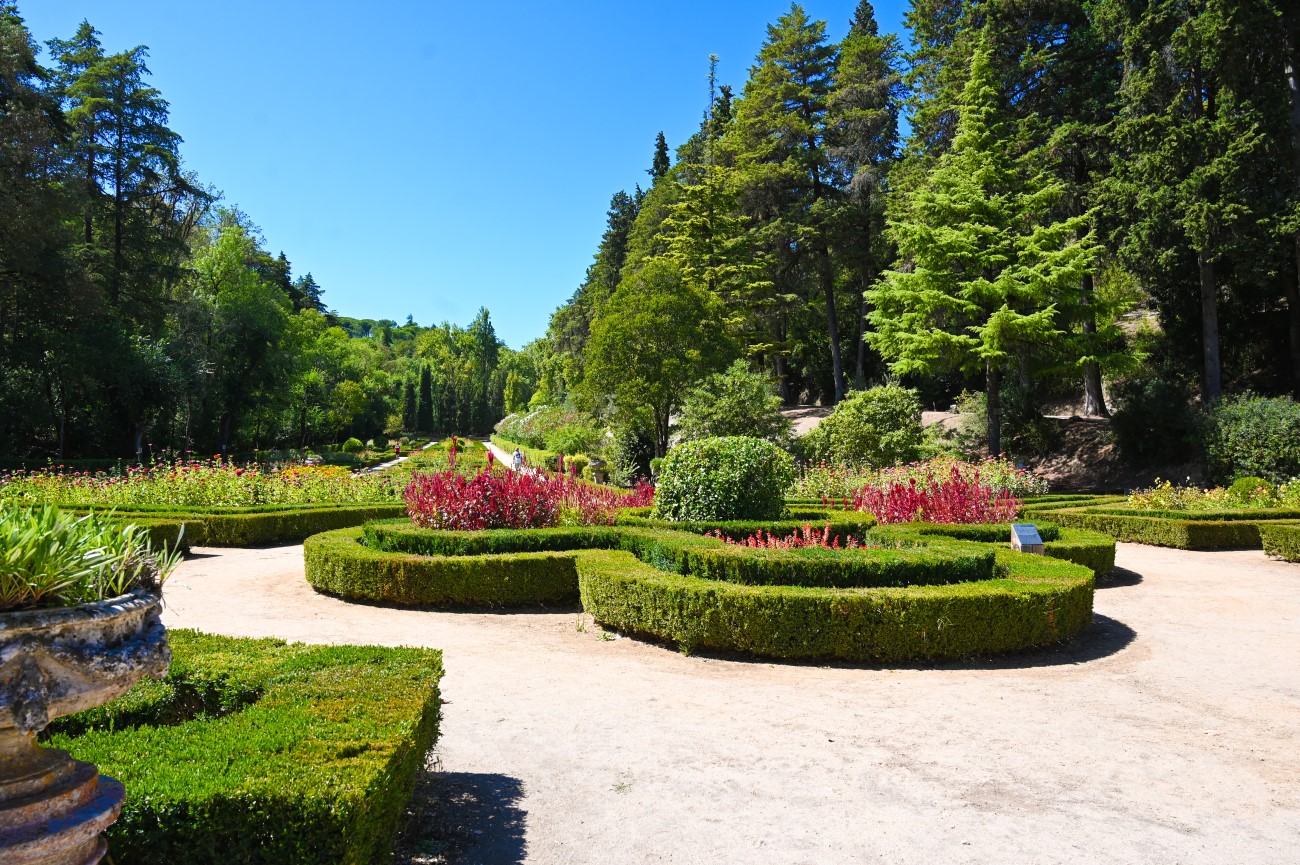 Praça da República is the town’s central square. Standing in the middle of it, you’ll find the statue of Gualdim Pais, a Knights Templar Master and the founder of Tomar. Opposite that is the Igreja de São João Baptista, a Gothic-style church that dates from the 15th century. From the outside, the church draws visitors with its pointy bell tower and Manueline doorway, but it’s worth going inside to admire the Renaissance paintings and traditional Portuguese tiles covering the altar. 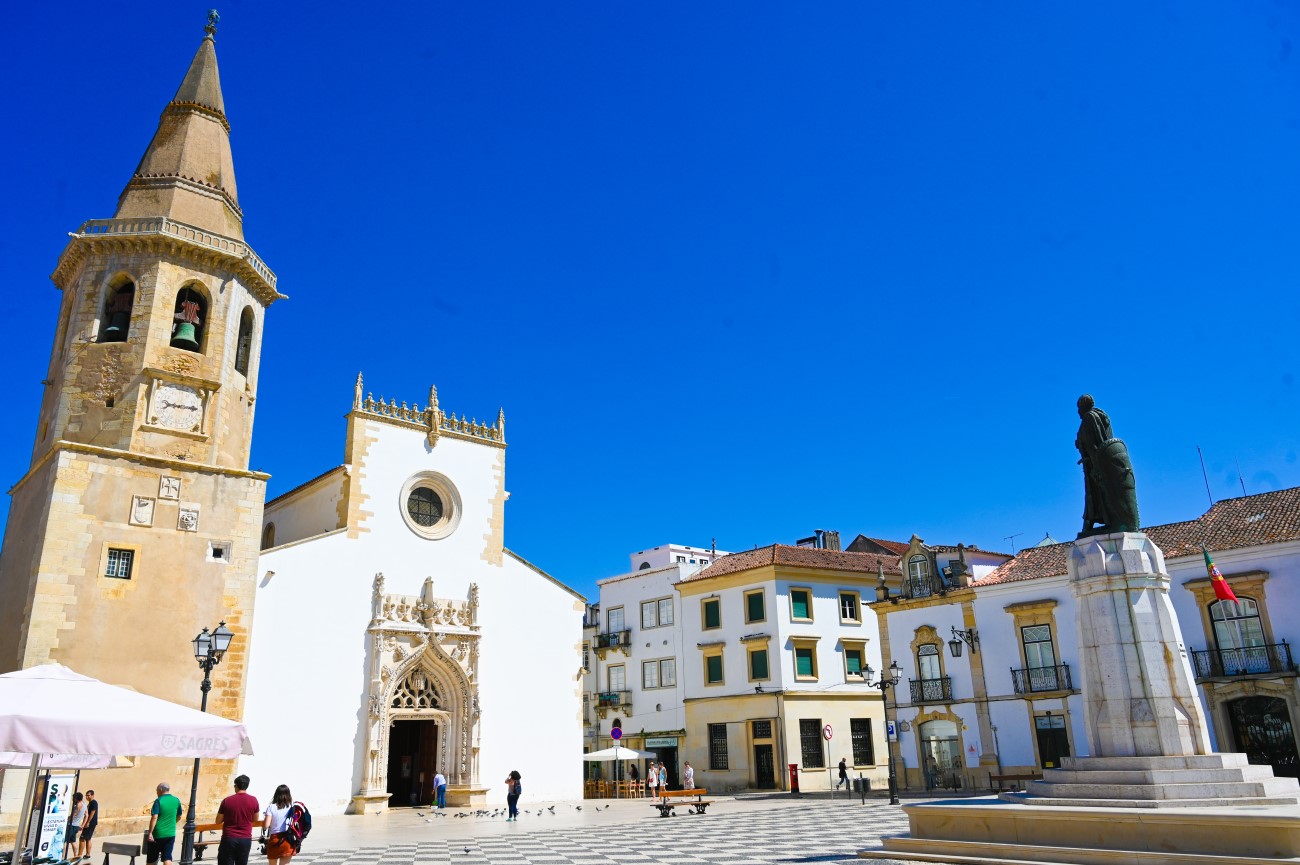 Igreja de São João Baptista and the statue of Gualdim Pais (a Knights Templar Master and the founder of Tomar) at Praça da República, Tomar, Portugal 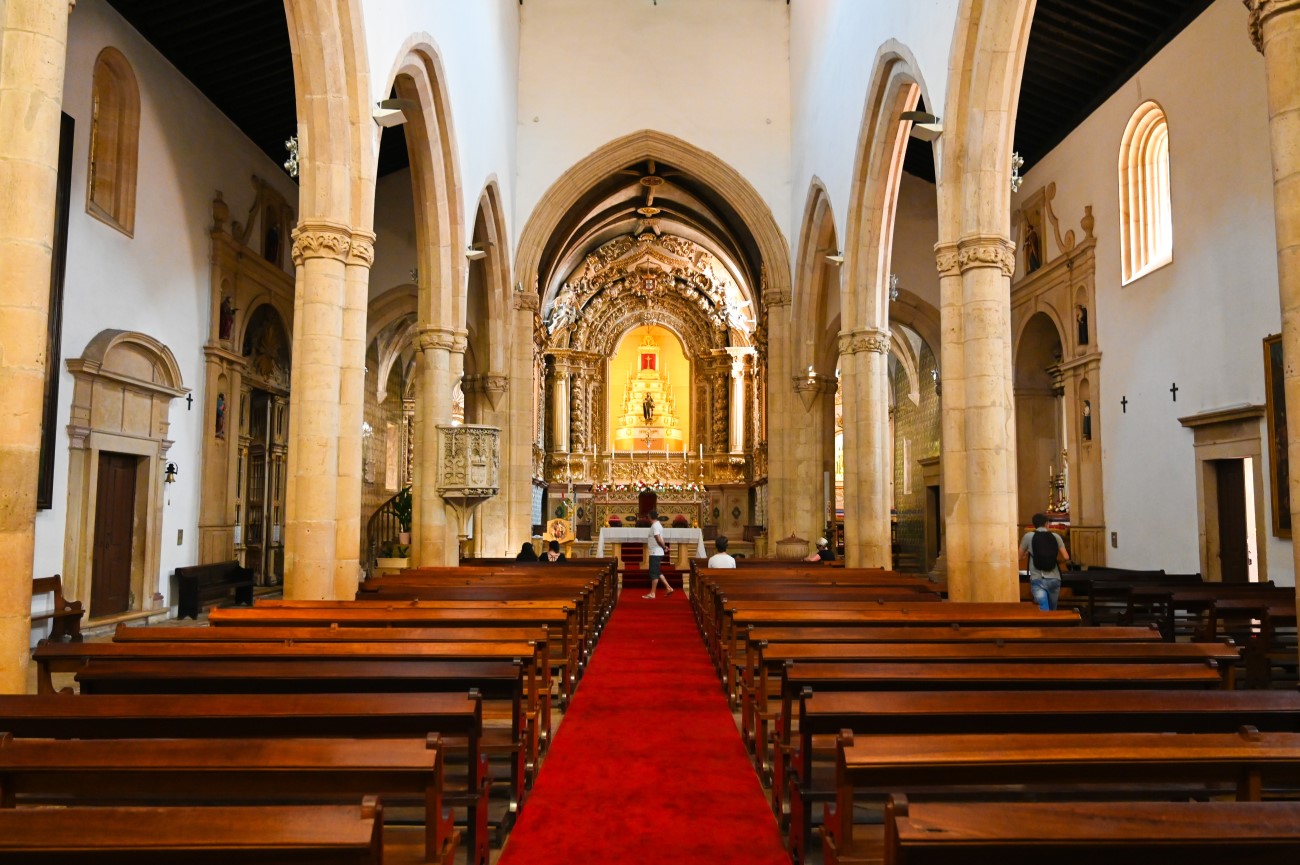 Take a stroll around Mouchão Park

After touring the old town, you can go for a walk at Mouchão Park. This green oasis stands on a small island amid the Nabão river, which you can reach by a series of pedestrian bridges. Near one of these bridges, is a large wooden waterwheel which is worth capturing. The park itself features a bandstand, a kid’s playground and plenty of benches to sit under the shady trees. There’s also a soccer field and a camping site nearby. 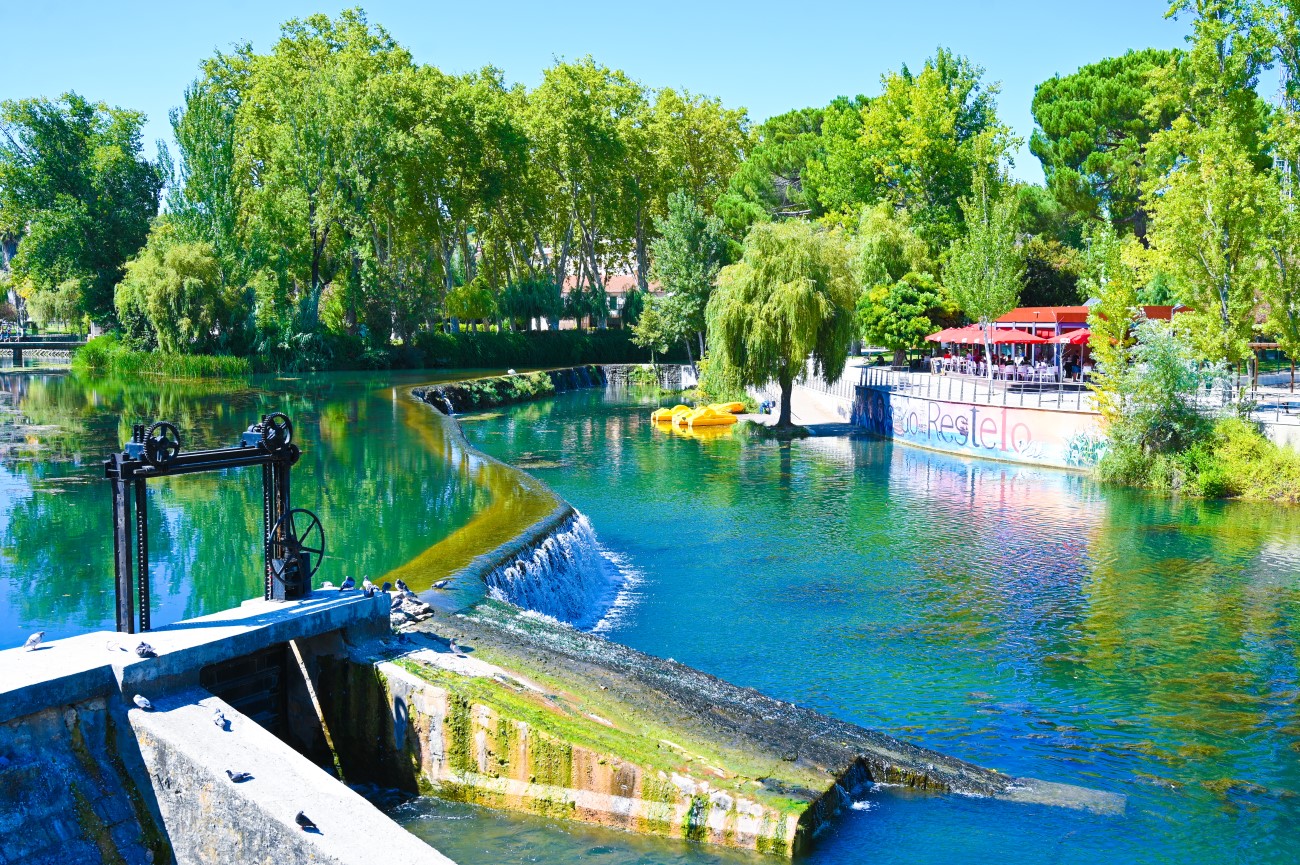 Step inside the Museu dos Fósforos

Housed inside a 17th-century convent, the Museu dos Fósforos features one of the largest collections of matchboxes in Europe. The boxes were gathered by a single local man called Aquiles da Mota Lima, who donated them to the town in 1980. There are over 40,000 matchboxes inside this quirky museum from all corners of the world, ranging from the 1800s to the mid-1980s. Every box is different with designs covering anything from movie stars to royal portraits and national flags. The museum is only a few steps away from the train station, so if you’re arriving by train, you can always make a stop here first. 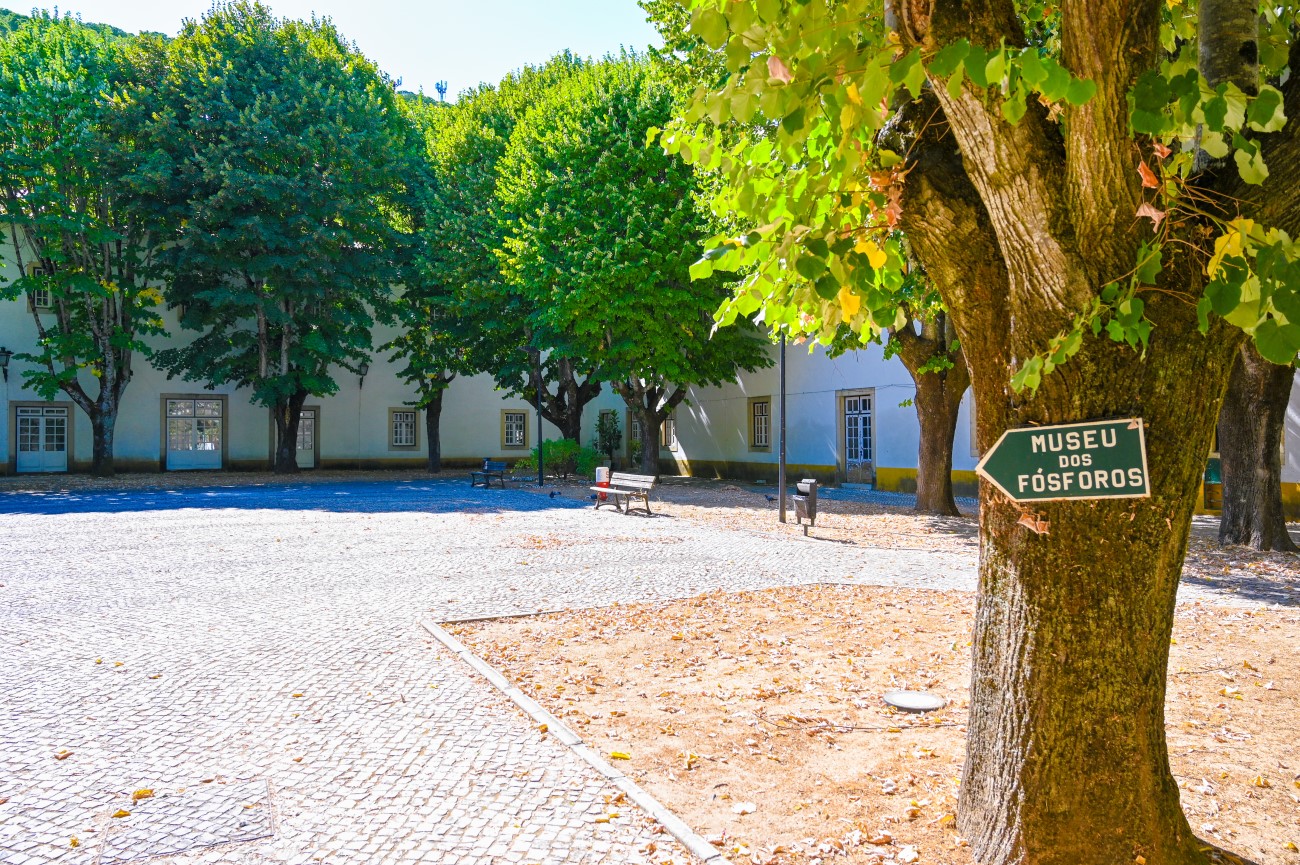 Like the Convent of Christ, this church is also part of the Knights templar route. Dating back to the 12th century, it was once the burying site of the order’s Grand Masters. It’s here you’ll find the grave of Gualdim Pais, the founder of Tomar. The church’s façade features a beautiful rose window and just ahead of it is an imposing bell tower. 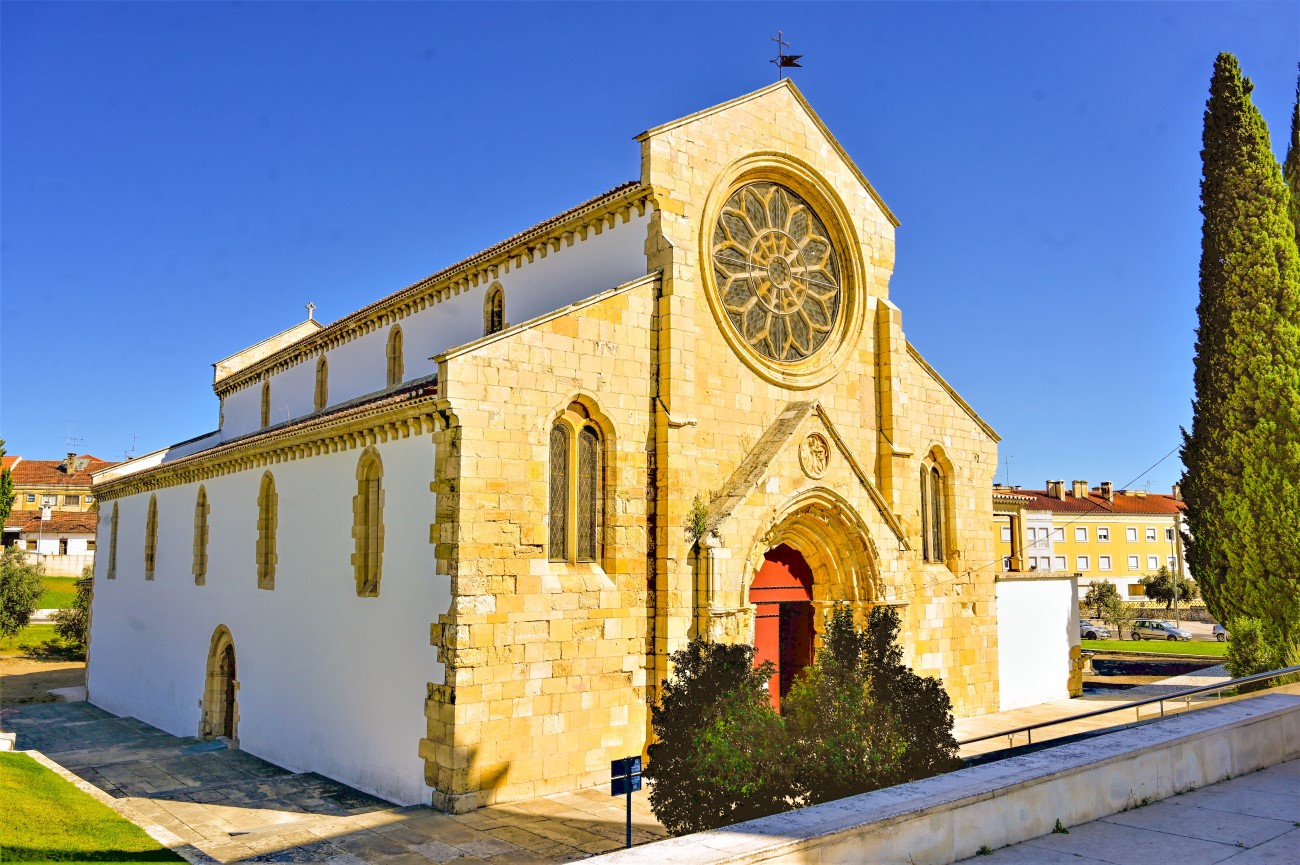 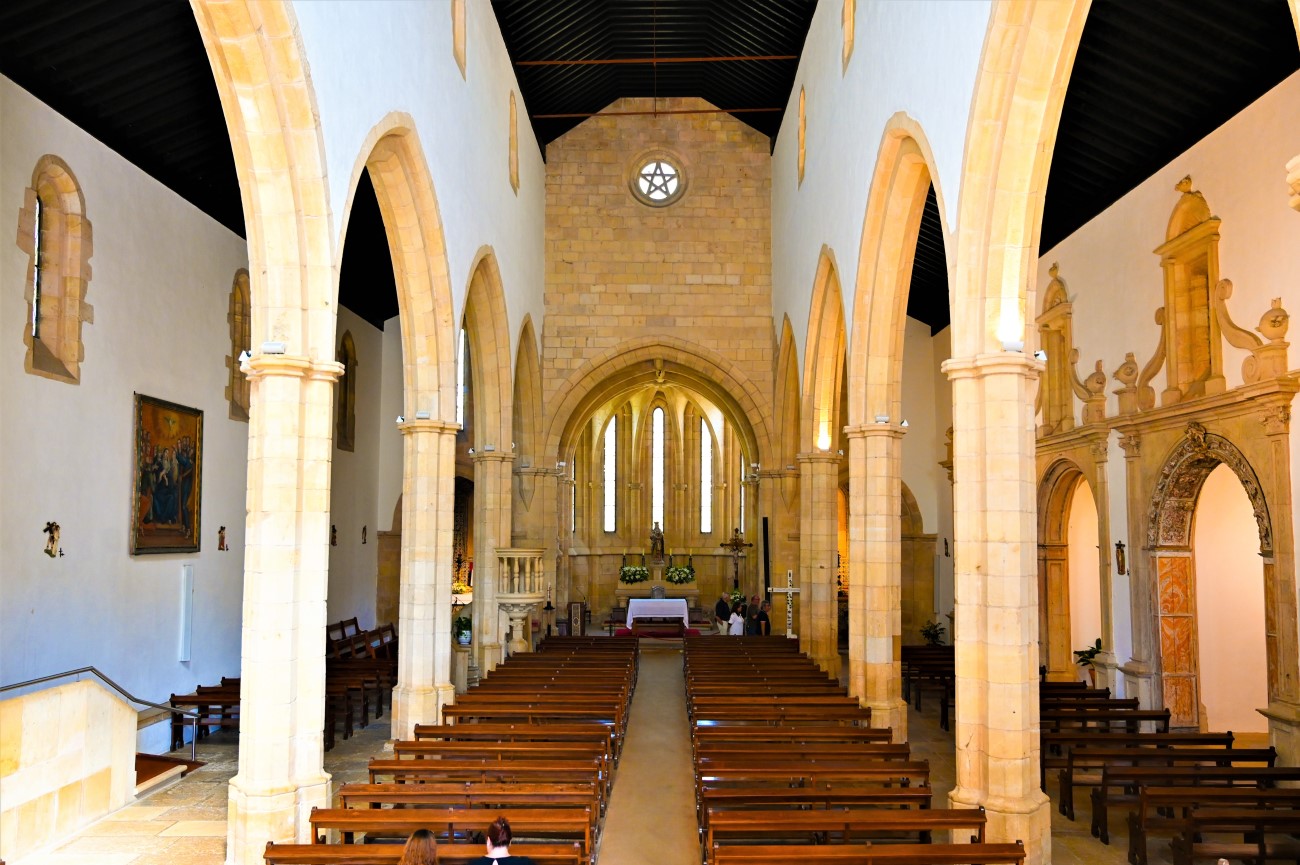 Take in the views at the Castelo do Bode Dam

If you’re coming to Tomar by car, you should visit the Castelo do Bode dam. Located on the Zêzere river, it’s only a 15-minute drive from the town and holds a large lake surrounded by a pine forest. You can park at the top of the dam to admire the views, or you can spend the night here to make the most of this serene landscape. There are plenty of accommodation options in the area, including a camping site and a hotel on an island called Ilha do Lombo. In the summer, you can enjoy the river beaches, practise water sports or take a leisurely boat trip along the lake. 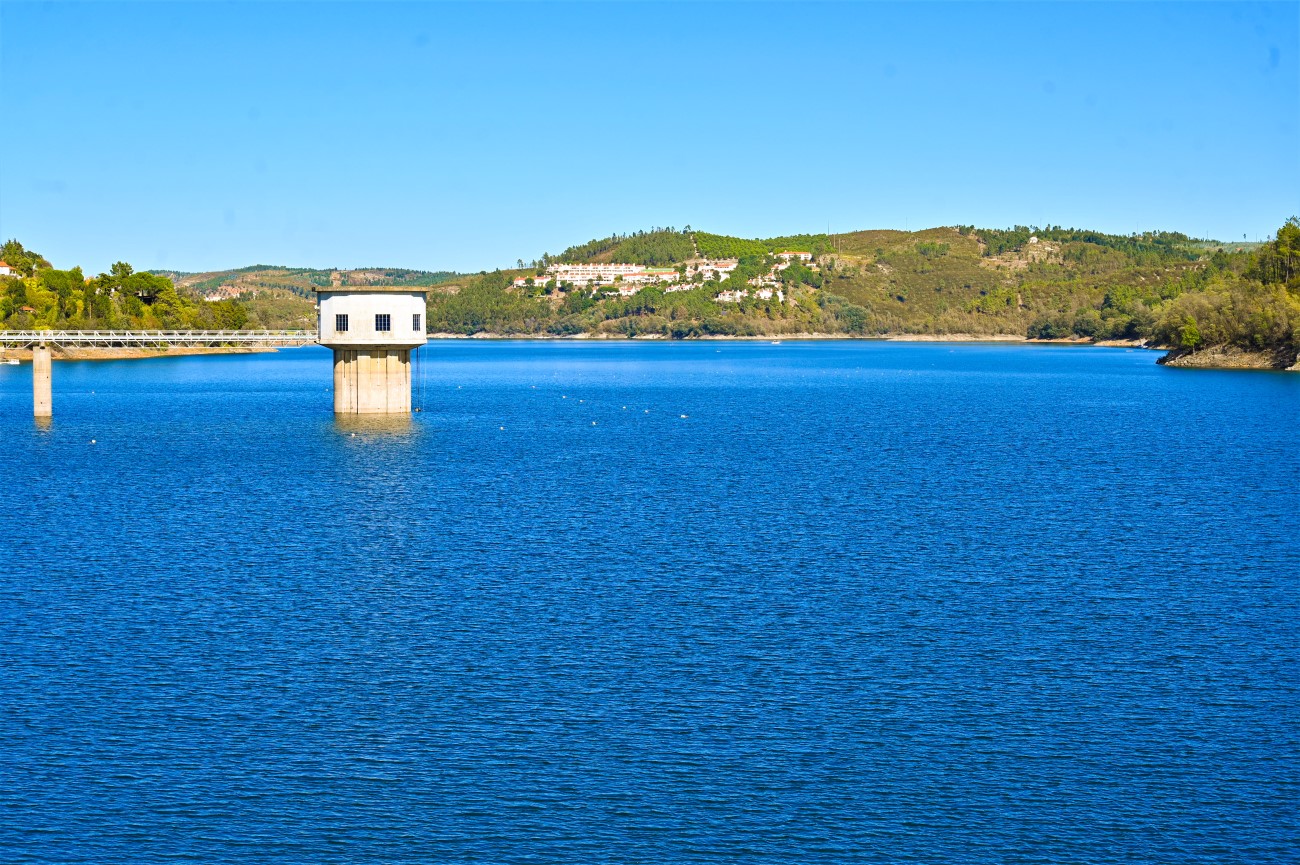 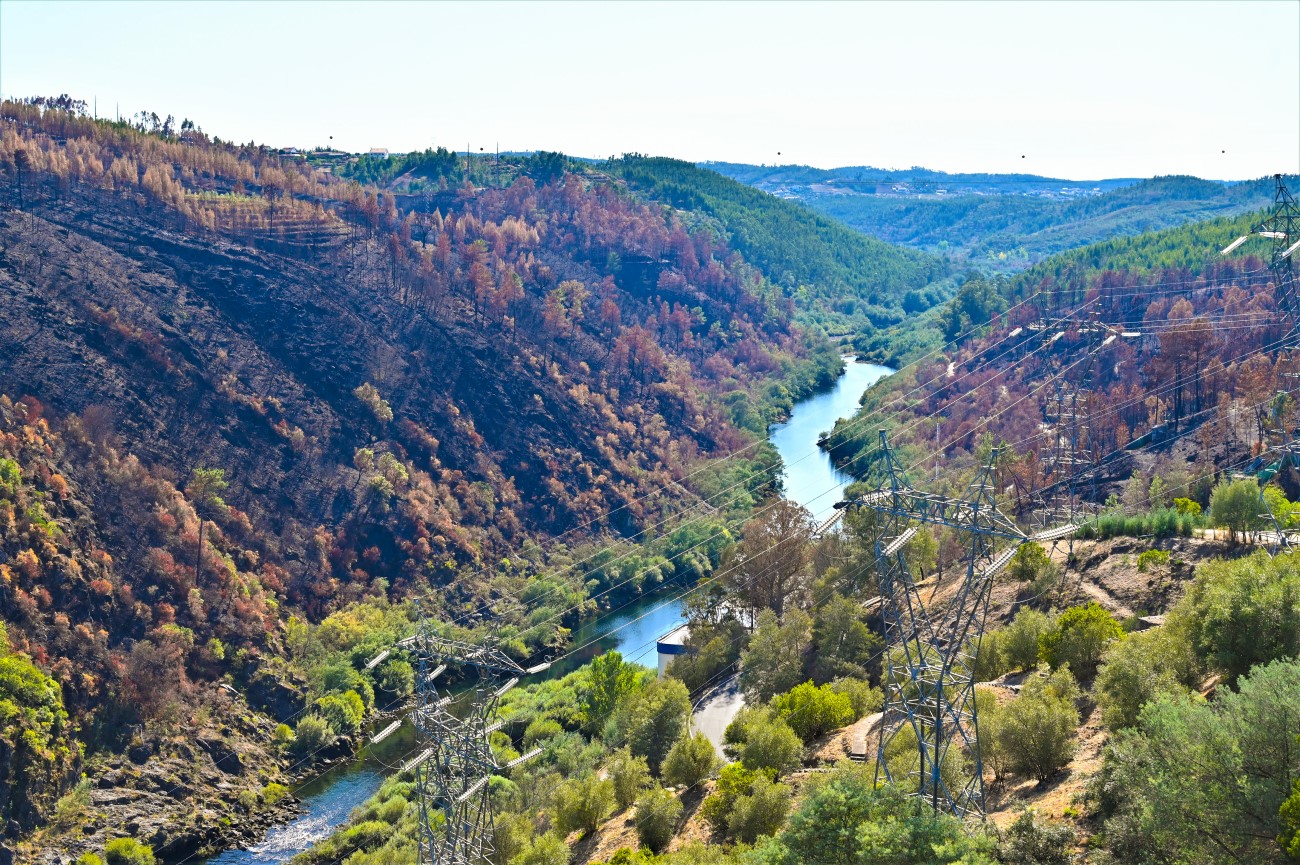 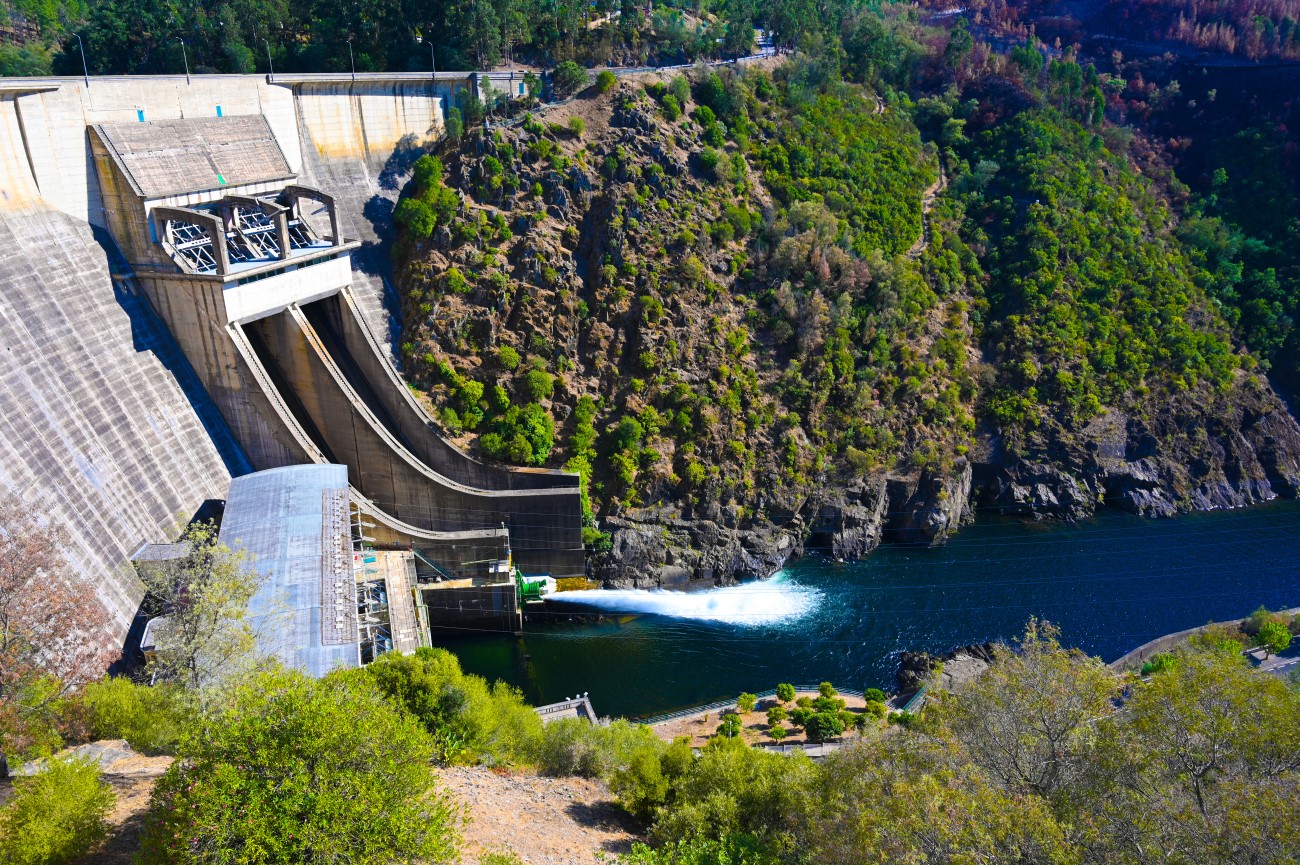 You can combine your visit to Tomar with a trip to other nearby towns and villages. We recommend stopping by Dornes, Ourém, Almourol or Fátima.

Dornes​ is one of Portugal’s most beautiful villages. The village juts out into the Zêzere river, creating this magical landscape surrounded by water and trees. It has little less than 600 residents who rely mostly on tourism. Dornes is quiet during most of the year, but in the summer it attracts numerous visitors who come here to relax and enjoy the water activities.

Sitting atop a hill, ​ Ourém ​is a medieval village dominated by a castle. The area has been occupied since prehistoric times, but the castle you see today dates mostly from the 14th century. Beyond the castle, it’s worth wandering around the old town and admiring the houses which combine a series of architectural styles including Gothic, Manueline and Baroque.

A few miles south from Tomar is the ​ Castle of Almourol​.​ ​Dating back to the 12th century, it’s one of the many castles built by the Knights Templar Order. What makes this castle so special, however, is that it stands on an islet amid the Tagus river. To get there you need to catch a boat, either from Almourol or from Tancos.

Finally, there’s ​ Fátima​, a pilgrimage site that draws thousands of visitors every year to its Sanctuary. Even if you’re not religious, it’s hard not to feel amazed by the monumental plaza and the surrounding basilicas. The most important event in Fátima is the Processions on the 12th and the 13th of May.

Where to eat in Tomar

There are many restaurants in Tomar where you can grab a meal. We recommend Abrigo da Alma, Taverna Antiqua or O Alpendre.  Abrigo da Alma ​is a cosy restaurant near the riverfront that serves delicious dishes inspired by Mediterranean cuisine.

Around Praça da República is the ​ Taverna Antiqua, ​a medieval-style tavern that invites you to travel back in time. From the decor to the menu, everything here comes with a medieval theme. Occasionally they host live music performances, which add even more to the atmosphere.

Further out, on the way to Castelo do Bode you’ll find ​ O Alpendre​. This restaurant specializes in traditional Portuguese cuisine, including a good selection of steaks. There’s a daily menu, but you can also order à la carte.

Where to stay in Tomar

If you decide to spend the night in Tomar, we suggest booking a room at the ​ Hotel dos Templários​ or the Thomar Boutique Hotel​ .

Hotel dos Templários​ is a four-star hotel located near the Mouchão park. It has 167 rooms, with some offering views of the river or the castle. The hotel features two pools, a spa and a small gym so you can stay active during your holiday. There’s also a restaurant on-site and a bar where you can enjoy a cocktail and listen to the piano.

On the other side of the river is the ​ Thomar Boutique Hotel. ​Each floor of this hotel is inspired by a different era of Tomar’s history, from the Roman age, passing through the Templars and the Discoveries period. The highlight for guests is the rooftop terrace, which overlooks the castle and the Nabão river.

How to get from Lisbon to Tomar

There are three ways to get from Lisbon to Tomar: