On the south coast of Spain lies Andalucia, a region dotted with hills, whitewashed villages and pristine beaches. Between the 8th and the 15th century, it was occupied by the Moors, and these roots are still visible today in cities like Seville, Córdoba and Granada.

We’ve set out to explore these wonders on our Andalucia road trip, departing from Seville and ending in Marbella within 14 days. Along the way, we visited historical monuments, sampled sherry wine and climbed the Sierra Nevada, before heading off to the beaches of Costa del Sol. In the end, we took a slight detour to Gibraltar, to capture the Barbary apes on the Rock and explore its deep caves and tunnels.

Below is an overview of our Andalucia and Gibraltar road trip. You can follow along or choose your own starting point and go from there.

Note: ​​The links on this article will take you to a personalised itinerary of each city, which include tips on what to see, where to eat, and where to stay. 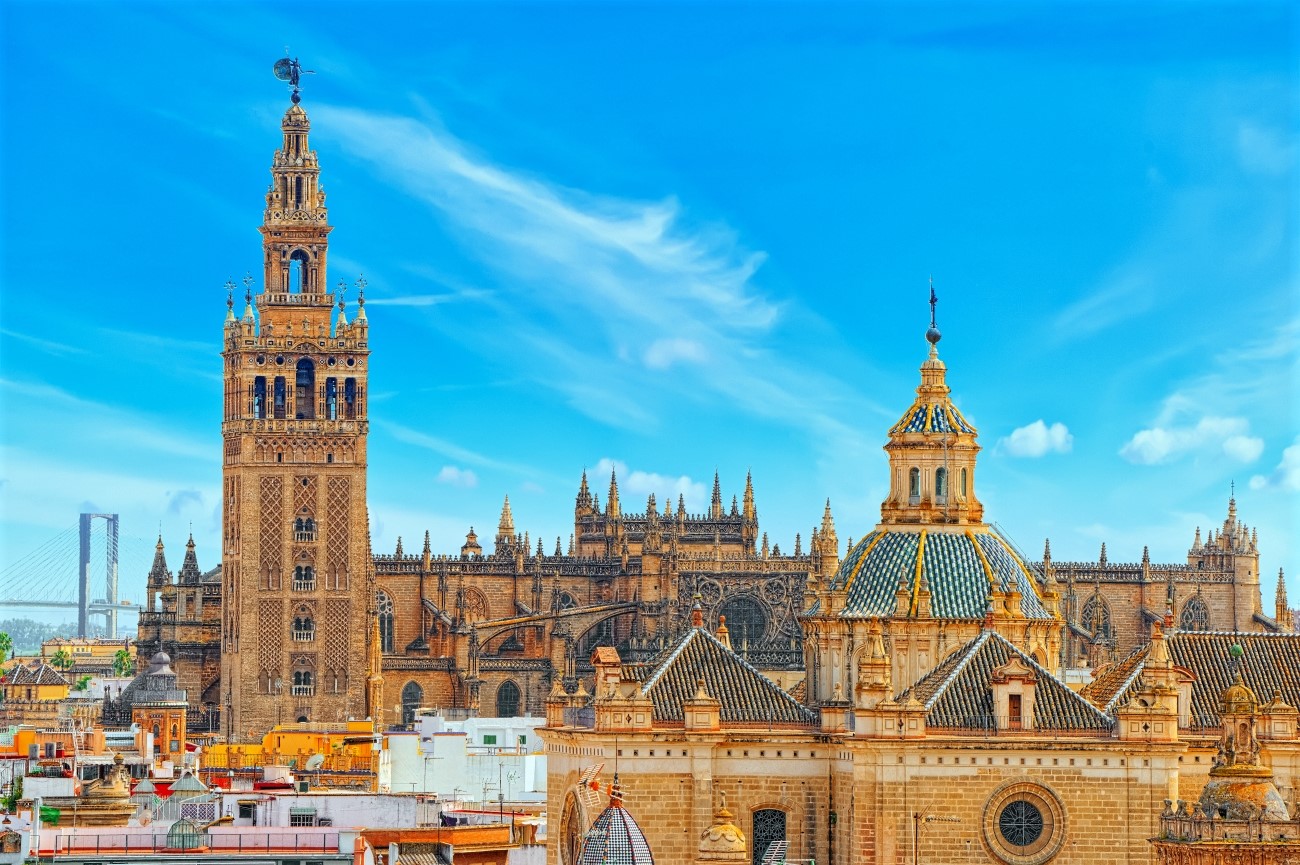 How Many Days In Andalucia, Spain

It’s worth spending at least a week in Andalucia. Start with a visit to the major cities like Seville, Córdoba and Granada and spend a couple of days exploring its monuments. Then, you can plan short trips to smaller towns like Jerez and Ronda. Our journey stretches for 14 days and covers most of the region, including the Sierra Nevada mountains and the beaches of Cádiz and Marbella. 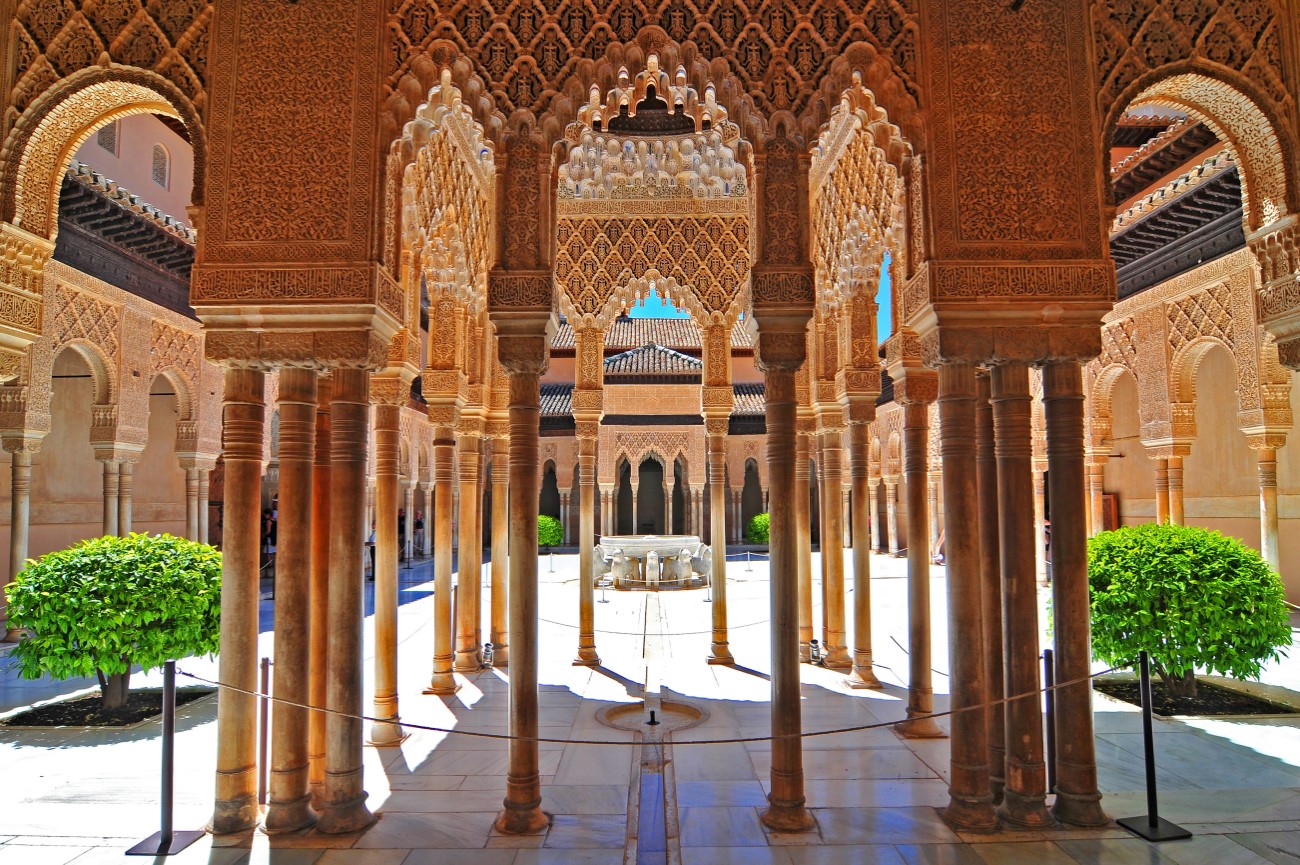 Where To Base Yourself In Andalucia

We’ve chosen Seville as our starting point for this journey as it’s the capital of Andalucia. It also offers several flight connections, making it easy to reach the city from any part of the world. Another alternative would be to start down south in Málaga or along the mountains in Granada since these cities have the other main airports in the region.

Home to flamenco and delicious tapas, Seville offers the perfect introduction to the Andalusian lifestyle. Most people come here to see the Alcázar, but the city has many other attractions, including the picturesque Plaza de España and the striking Metropol rooftop.

Before setting off on our road trip, we spent two days in Seville, exploring its squares and monuments. From the cathedral in the old town to the ceramic shops in the Triana neighbourhood, and of course, we couldn’t leave without seeing a flamenco show. 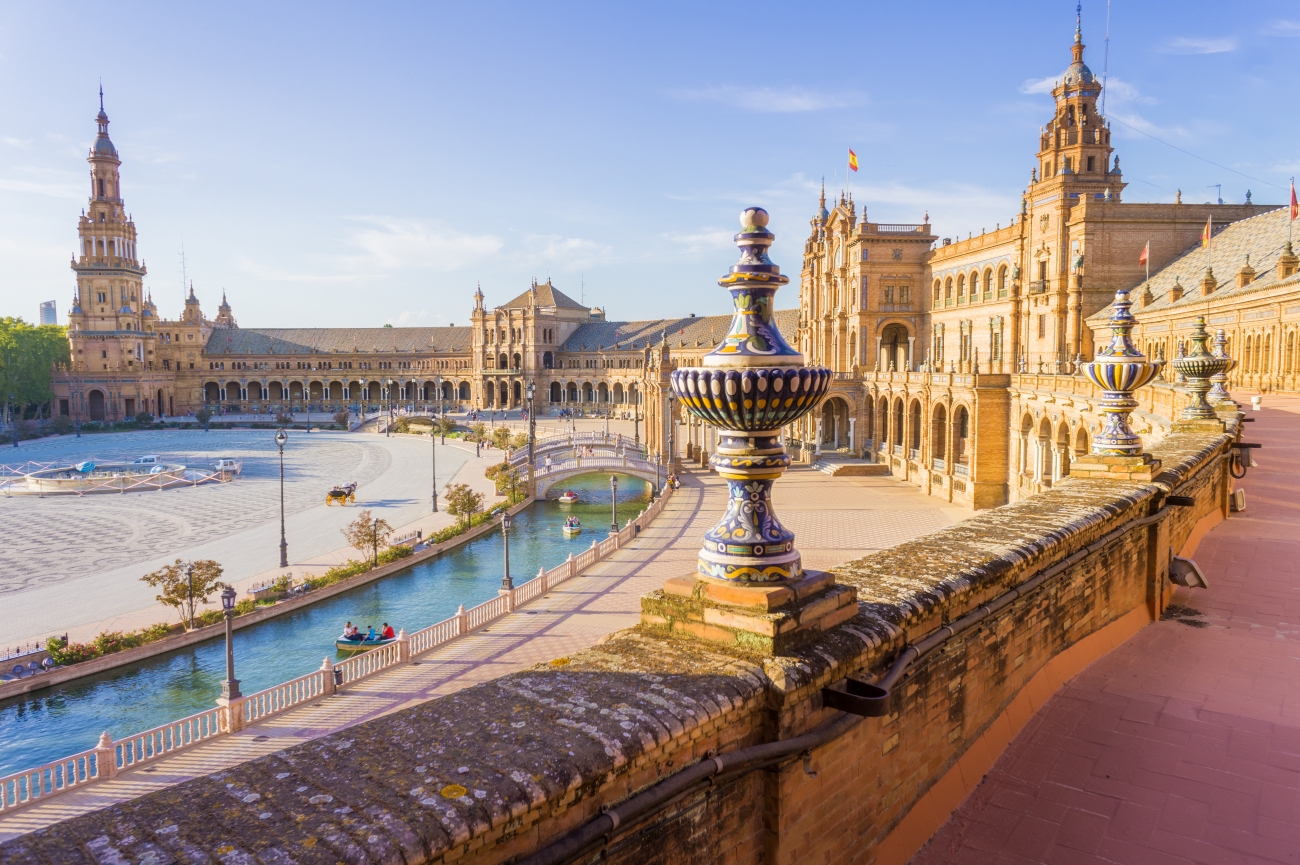 After Seville, we drove down to Jerez, passing through the whitewashed town of Arcos de la Frontera. Jerez is the birthplace of sherry wine, so we started by visiting one of the local wineries. Next, we took a tour around the town, stopping to visit the Alcázar and the Cathedral. We ended up at the Real Escuela Andaluza del Arte Ecuestre to watch the dancing horse show that Jerez de la Frontera is also renowned for.

If you’re interested in trying more sherry wine, we suggest exploring other regions around the Sherry Triangle like Sanlúcar de Barrameda and El Puerto de Santa María. You can learn more about this classic Spanish drink and the region’s best wineries in our Sherry Route Guide. 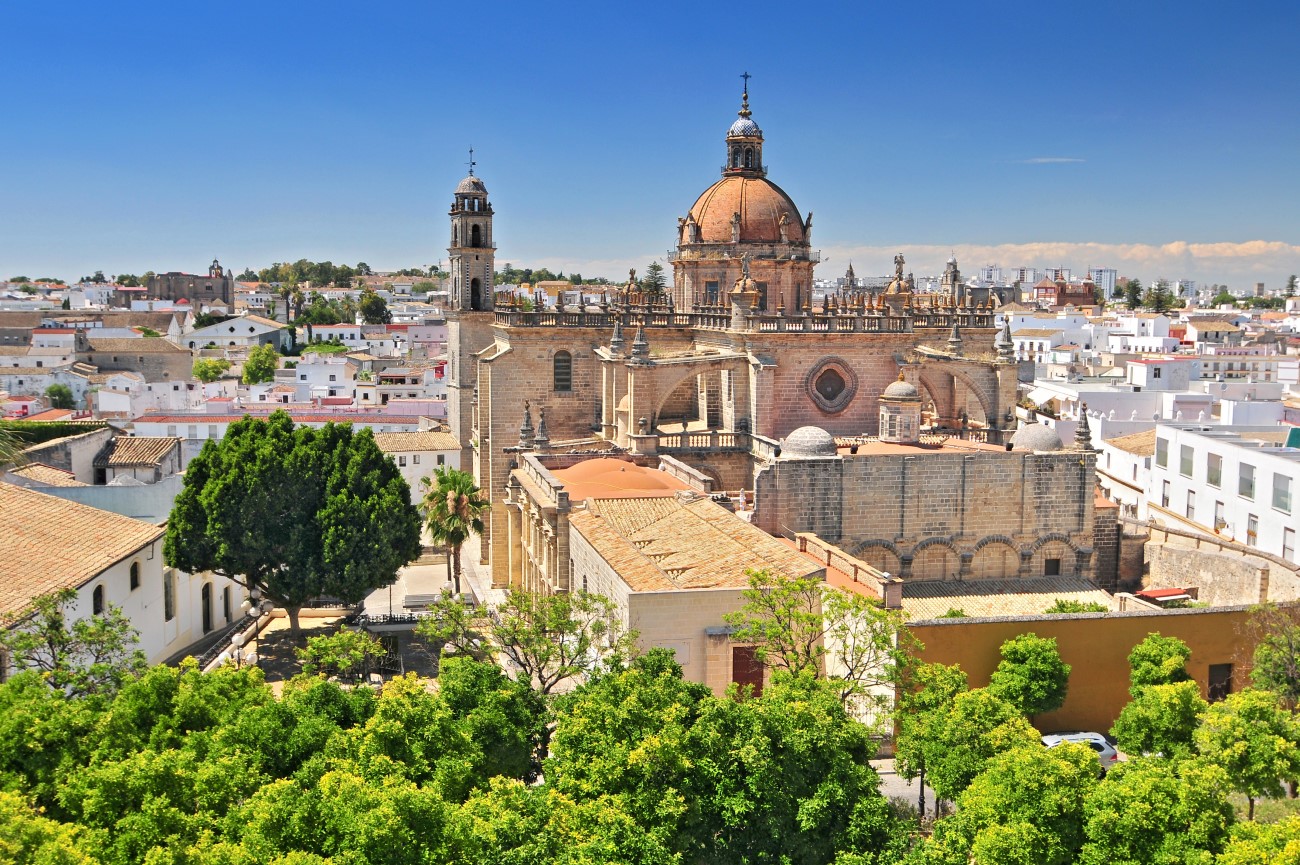 Our next stop on the road trip was Cádiz, an ancient port city on the west coast of Andalucia. For a while, it was the home of the Spanish navy, and it was from here that Christopher Colombus embarked on his journey to the New World. In Cádiz, we came across the first beaches on our trip and sampled some delicious seafood at the local market. We also visited a few historical landmarks like the cathedral and climbed up to the Torre de Tavira for a panoramic view of the city. 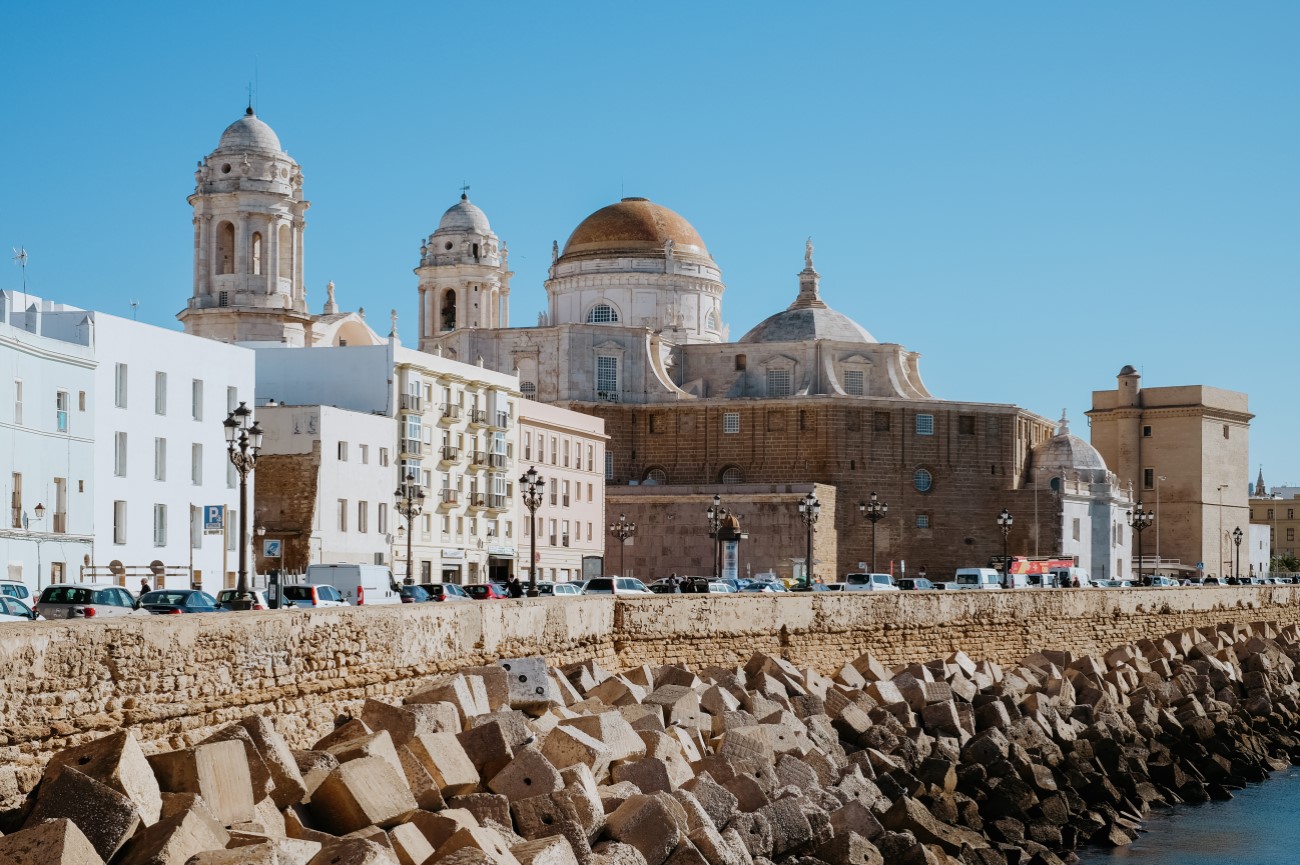 From Cádiz, we made our way to Ronda. It’s a small town, but it’s worth a visit for its dramatic scenery. Set on the Málaga province, Ronda sits right on the edge of a ravine, amid mountains and the Guadalevín river. During our tour, we crossed the iconic Puente Nuevo for the views and wandered through the old town where we spotted Moorish-style landmarks like the Arab Baths and the Palacio de Mondragon. 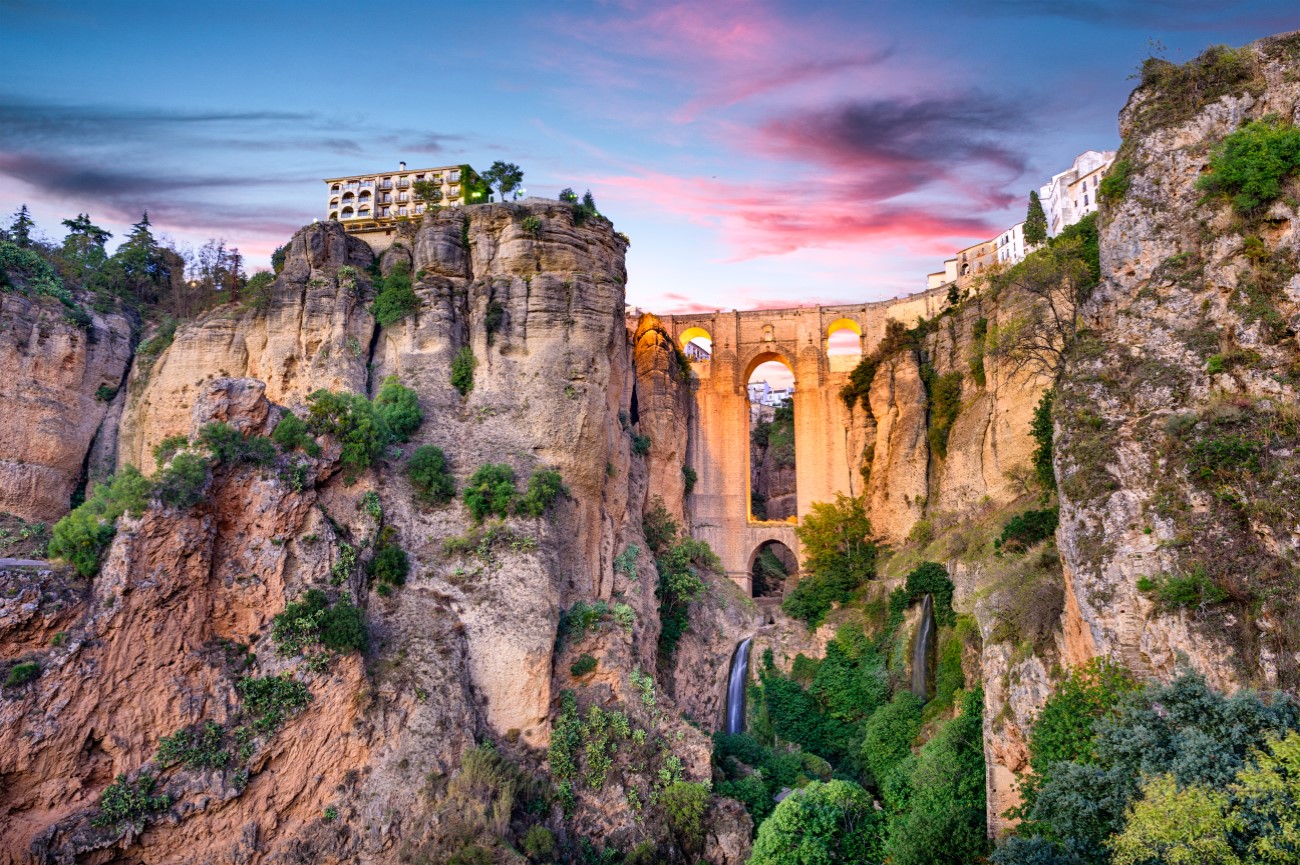 After spending a day in Ronda, we drove north towards Córdoba. Back in the 10th century, the city was one of the most important cultural hubs in Europe. Many scientific and artistic developments came from the exchange between Muslims and Christians who lived in Córdoba at the time. We spent two days in the city, discovering its historical heritage like the infamous Mezquita and wandering through its flowery streets and patios. 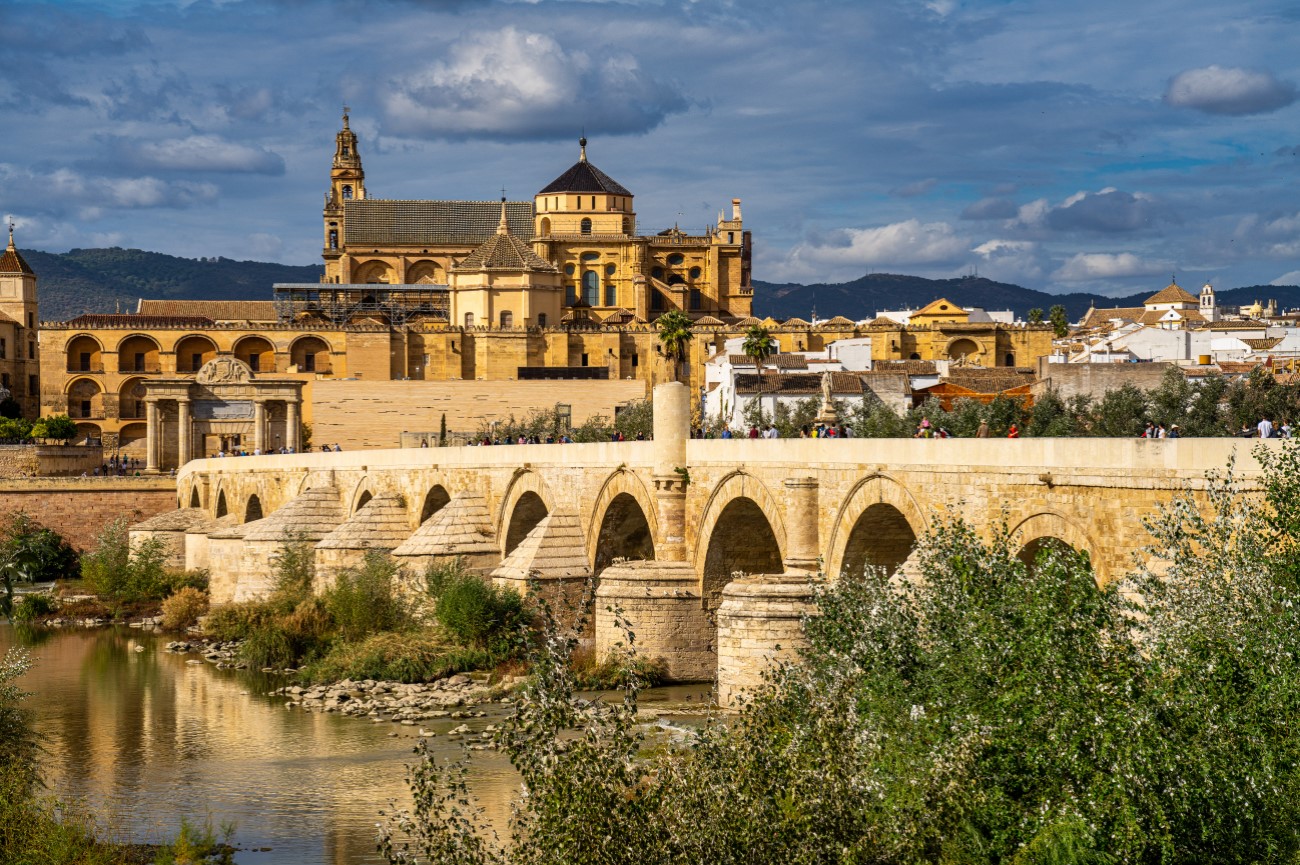 Our journey continued in Granada, where we took another two-day break. We visited the iconic Alhambra and spent most of our first day exploring its palaces and courtyards, before venturing through other neighbourhoods like Sacromonte and Albaicín. We also indulged in numerous tapas, since this is one of the few cities in Andalucia where you get free tapas with a drink. 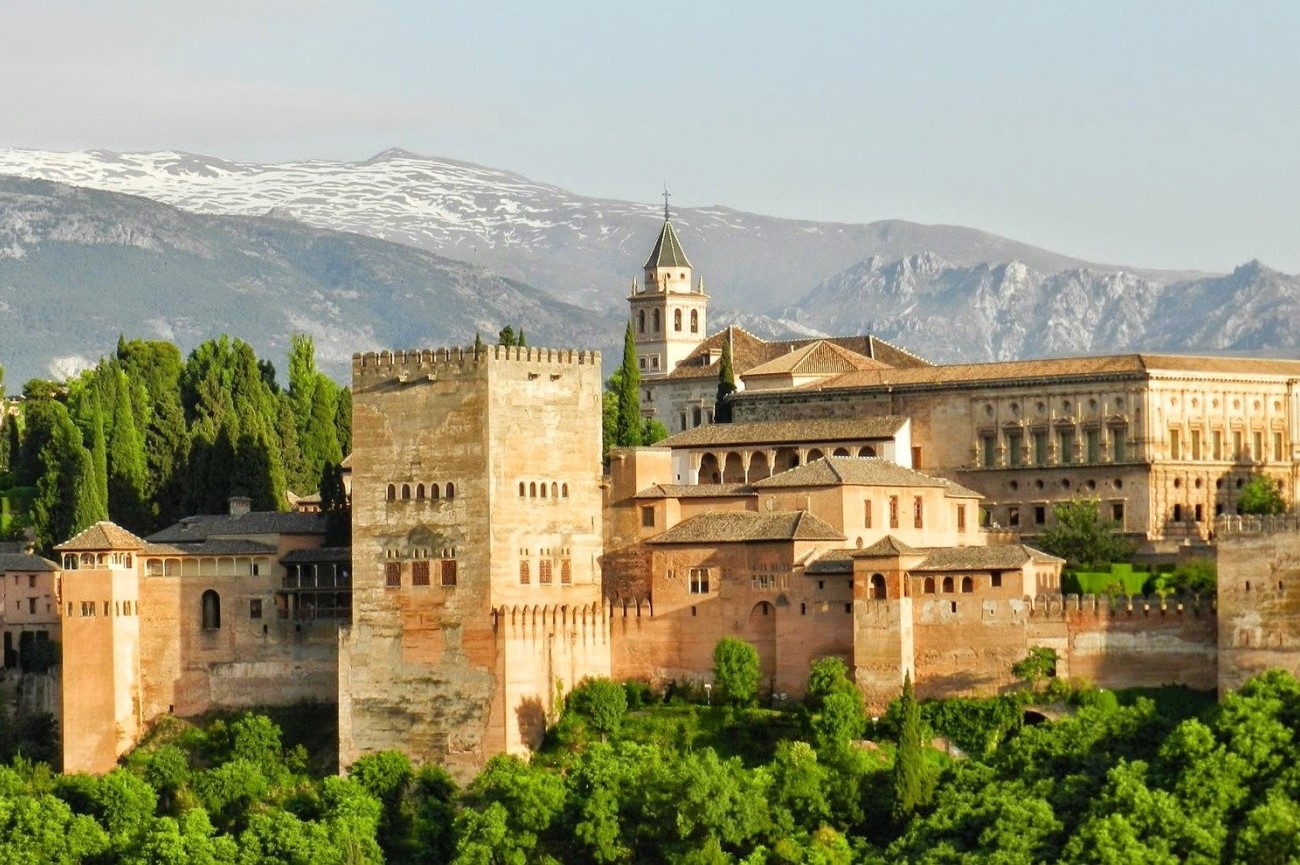 From Granada, we drove up to the Sierra Nevada. This mountain range is home to the largest natural park in Spain and a ski resort that attracts visitors from all over the world. In our guide, we included a tour through the remote villages of Las Alpujarras, as well as information about skiing and hiking trails. 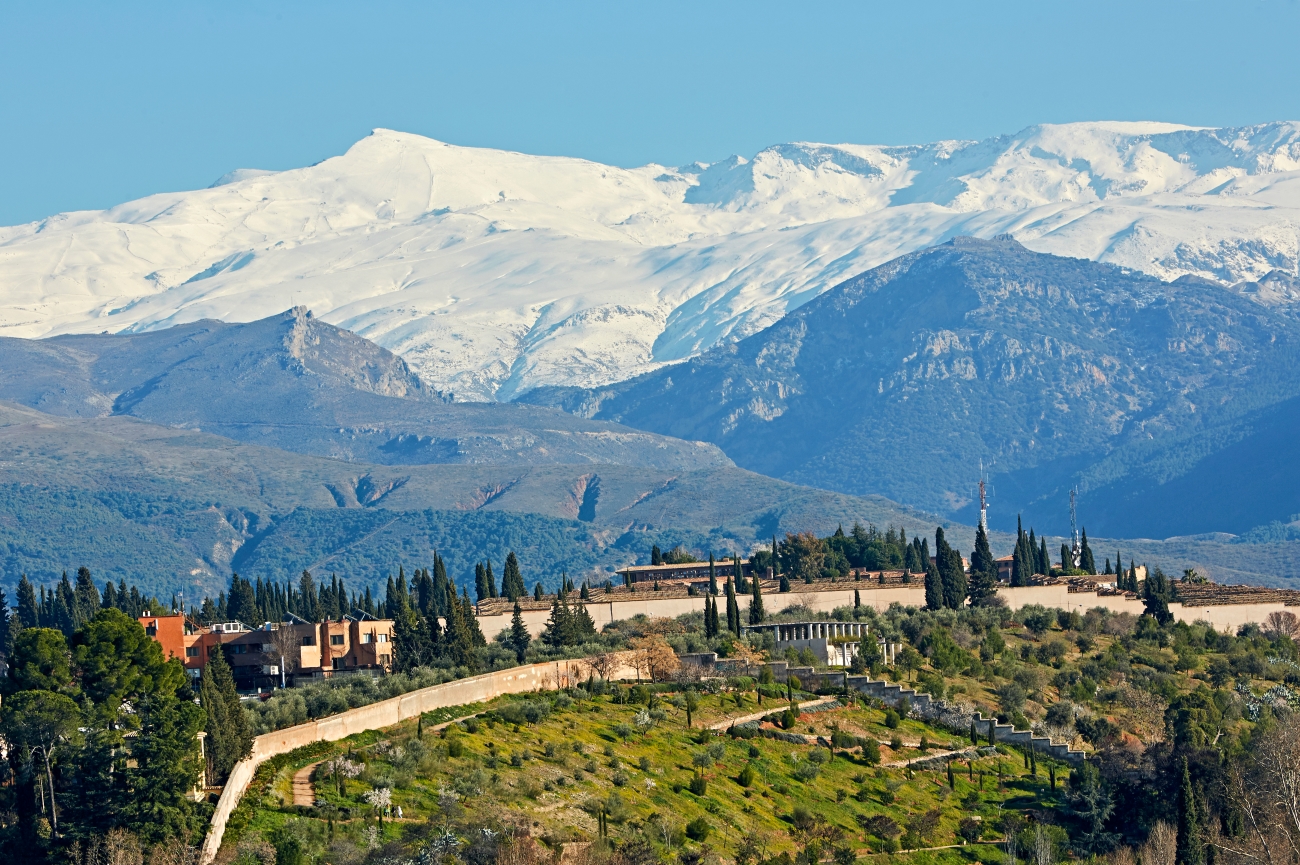 After Granada, we headed to the Costa del Sol. Our first stop on the road was Málaga, the birthplace of Picasso and home to several art museums. We started by exploring the old town, visiting the Alcazaba and the Cathedral, and then moved on to the modern district around the seaport. We spent our second-day eating seafood by the beach and touring the city’s creative hub, Soho. 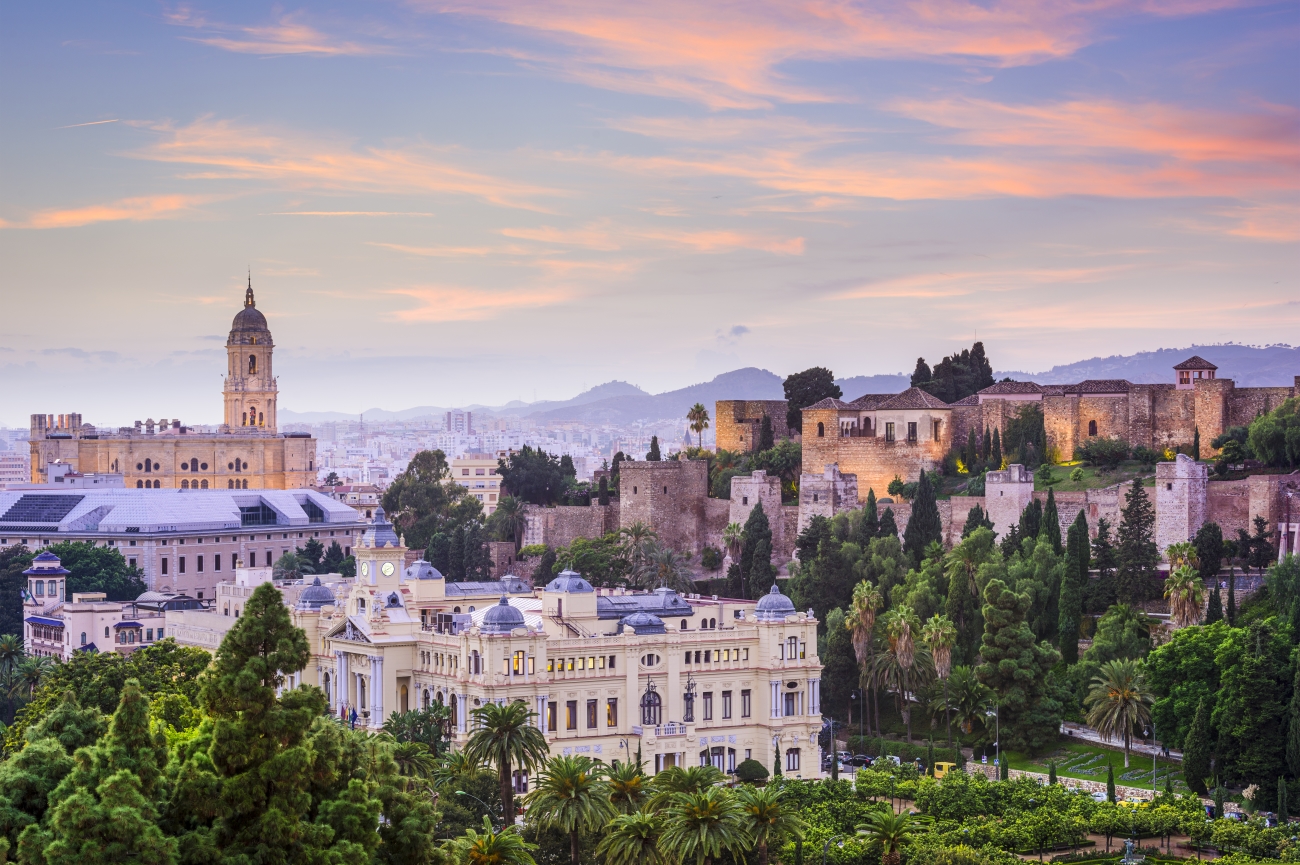 Still on the coast, we drove to Marbella, where luxurious hotels and beaches awaited us. We covered Marbella’s old town in the morning and then followed the seafront promenade towards the flashy Puerto Banús, ending the night with a cocktail at the marina. 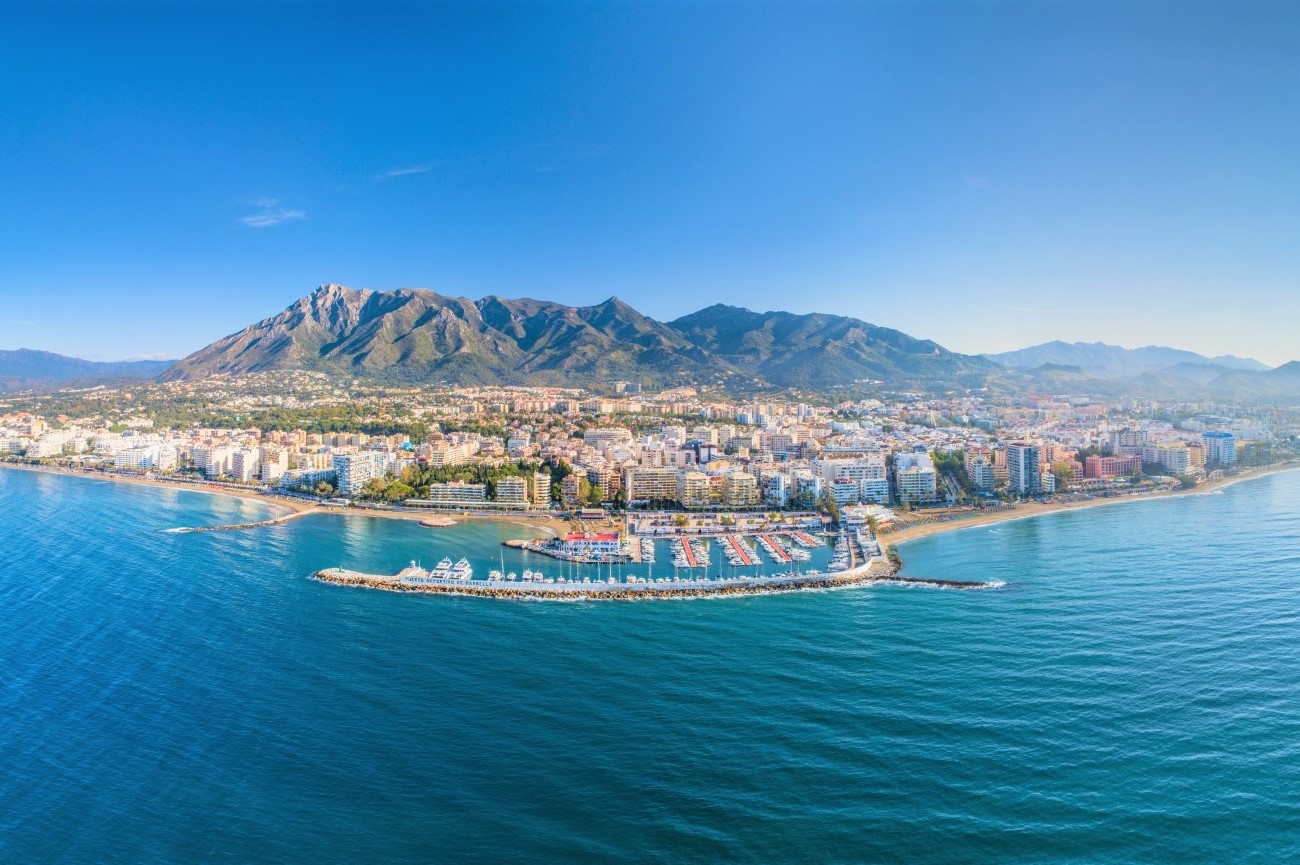 Since we were so close to the border, we decided to end our road trip with a detour to Gibraltar. After spending almost two weeks in Spain, this felt like a trip to another country. After all, this is a British territory, and the pubs and fish and chip shops are there to remind you of that. Gibraltar is small, and you can easily explore it in one day.

The Rock is the main attraction, and it’s up here you’ll find the infamous Barbary apes, as well as other sites like the military fortifications and the underground tunnels. We spent the morning exploring this area, stopping to admire the views in one of the many lookout points, before heading back down to the town centre.

Note: ​Gibraltar has its own airport so, if you’re following our footsteps, you might be able to schedule a trip back home from here. 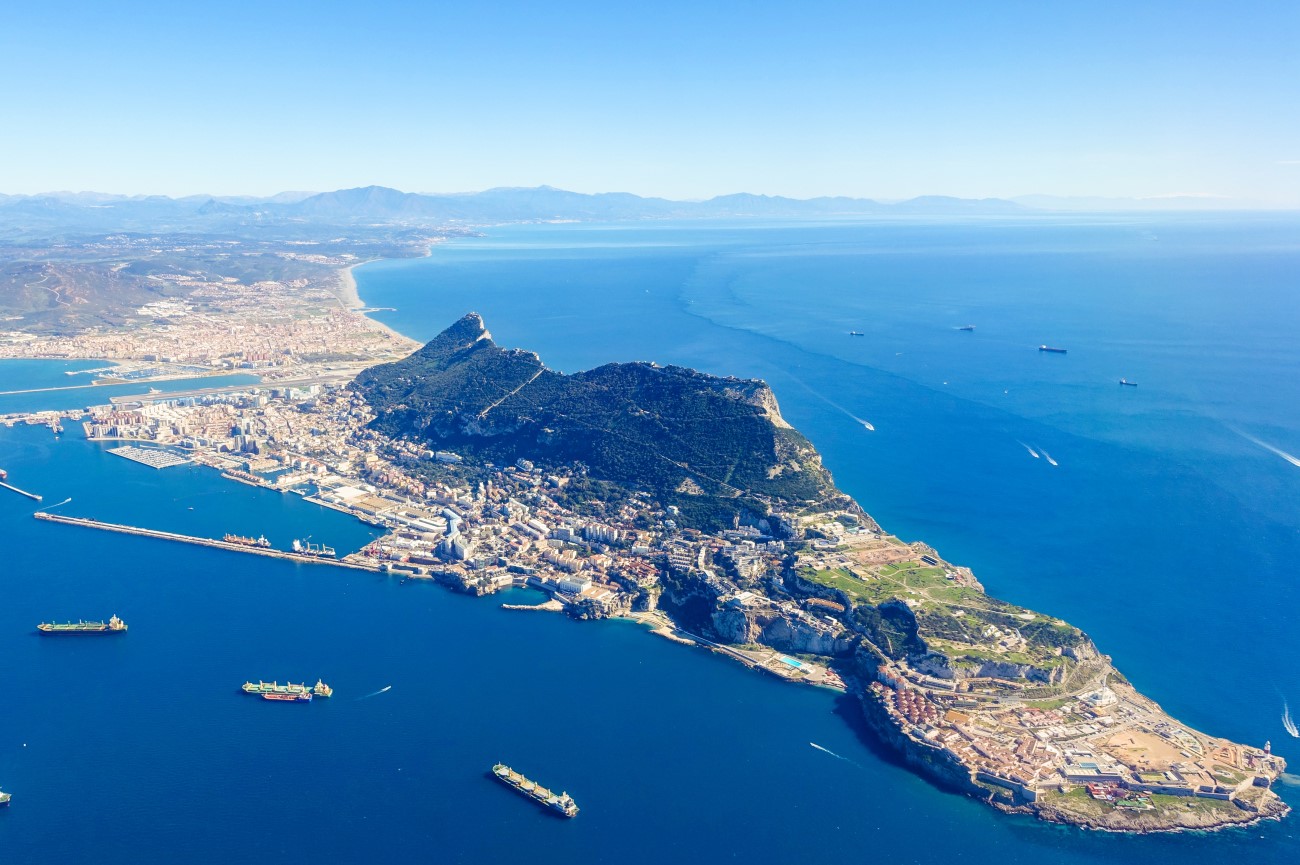