Discover Alcoutim on our Algarve Tour

This is our Alcoutim tour. We are now on day 22 of our Algarve tour and today we travel west until we reach the Spanish border. Alcoutim is a historic river town in Eastern Algarve. The town is surrounded by wooded hills and the Guadiana river, which separates Portugal from Spain.

It took me little less than two hours to drive from Monchique to Alcoutim. On the way there, I passed through many of the towns and villages that I visited along this road trip and others that I was yet to see. I crossed the Arade river into Lagoa, then came Guia, Almancil, Estói, and just when I was about to reach the border of Spain, I took the turn towards Alcoutim. As I got closer to the town, I saw hills scattered with houses and the Guadiana river flowing in the background. 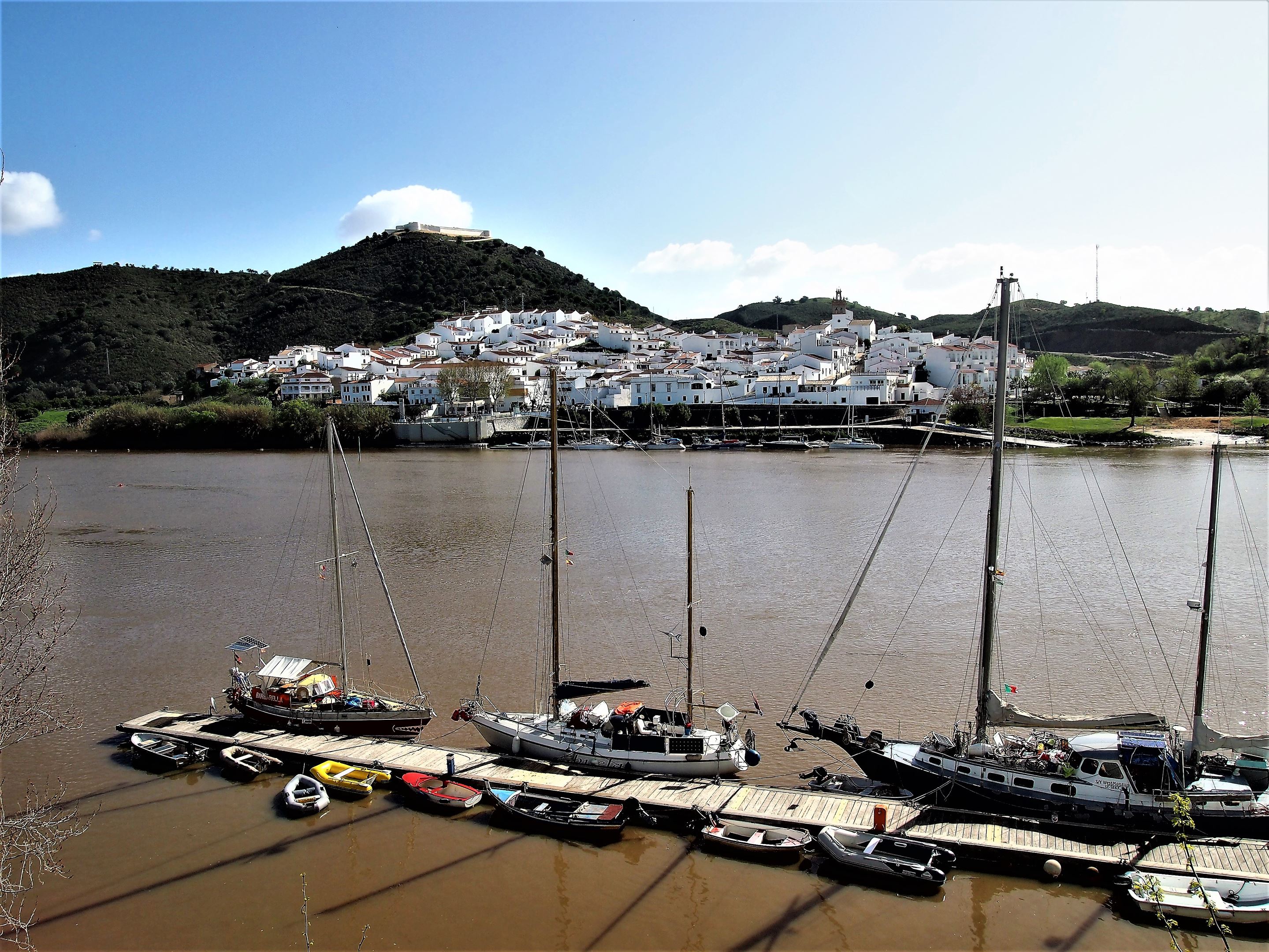 Looking across the Guadiana river to Sanlúcar de Guadiana in Spain. The platform for Limite Zero is hard to see but on the left side of the picture on top of the hill. 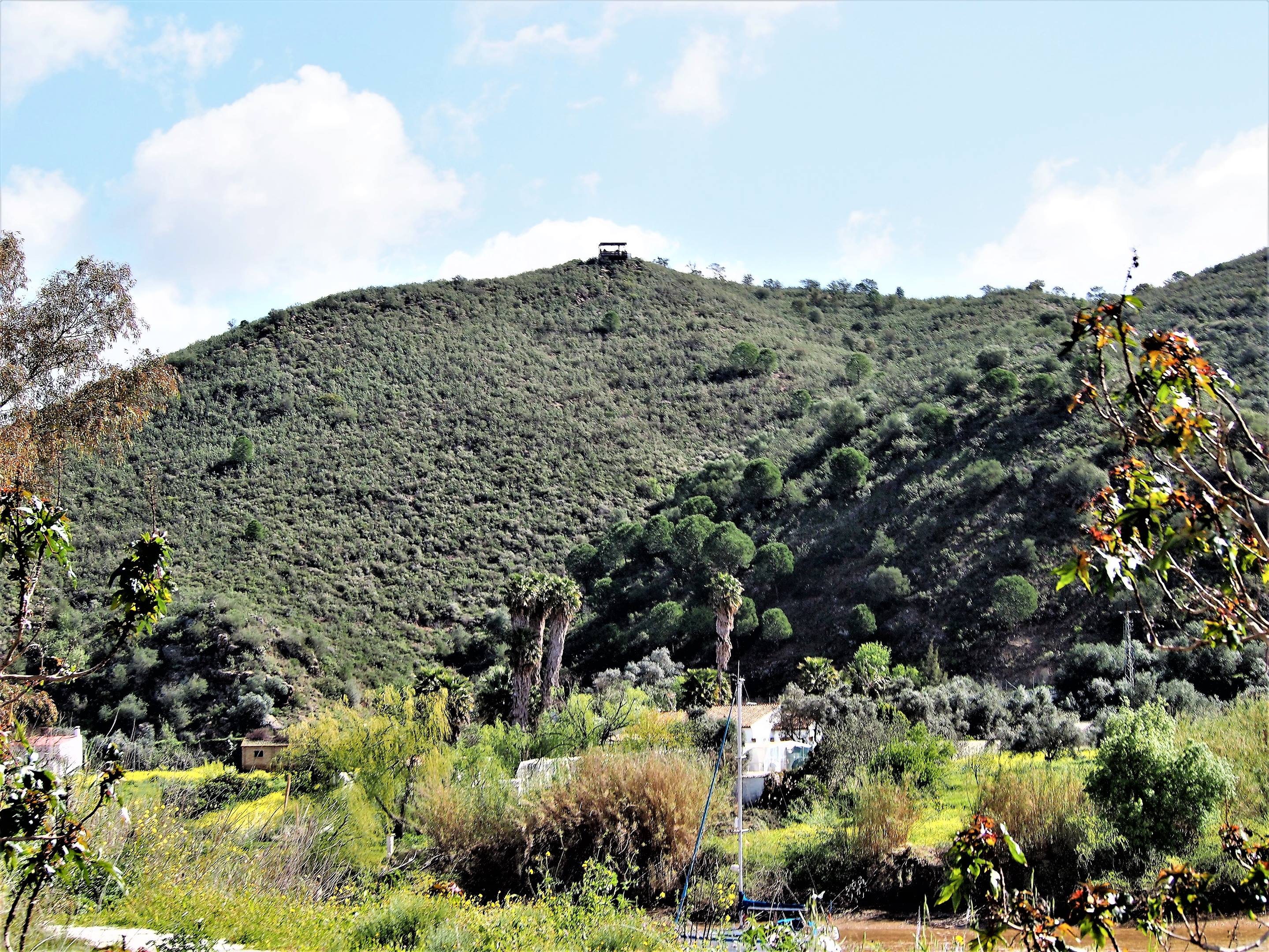 Limite Zero - zip line from Sanlúcar de Guadiana, Spain. You can see the platform in the middle of the picture.

The team of Iberian Escapes suggested taking the zip line, Limite Zero, from the neighbouring town of Sanlúcar de Guadiana to Alcoutim, but first, I needed to cross over to Spain! It didn’t show on Google maps, but there is a ferry connecting Alcoutim to Sanlúcar every hour that takes around 10 minutes. I’ve travelled across countries in a car, in a boat and in a plane, but never on a zip line, so when Iberian Escapes mentioned there was a zip line between Spain and Portugal, I was determined to take it.

Sanlúcar seemed exactly like Alcoutim, with its whitewashed houses and a castle high above a hill, making it hard to believe that I had just stepped foot into a different country. After taking the boat from Alcoutim, I was driven to the departure platform, where the long zip line awaited me and other fellow jumpers. I was the first one to get harnessed up and the first one to take the leap. It only took a minute in the sky to slide over to Alcoutim, but it was the most exhilarating minute of my journey in the Algarve. On my way down, I caught a glimpse of the boats sailing in the river and an endless trail of trees covering the picturesque hills of Alcoutim. 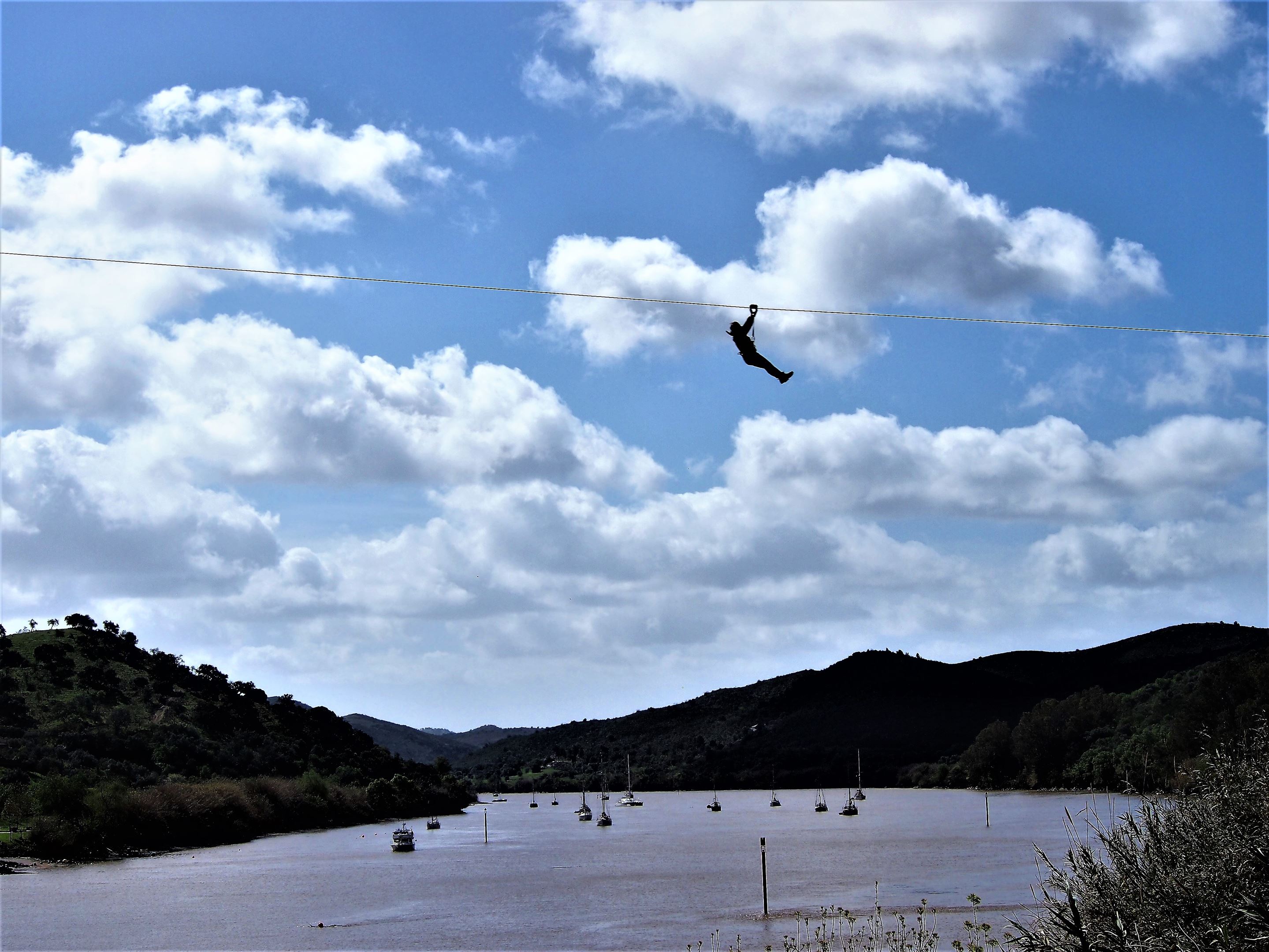 Coming down the zip line from Sanlúcar de Guadiana in Spain to Alcoutim in Portugal, across the Guadiana River 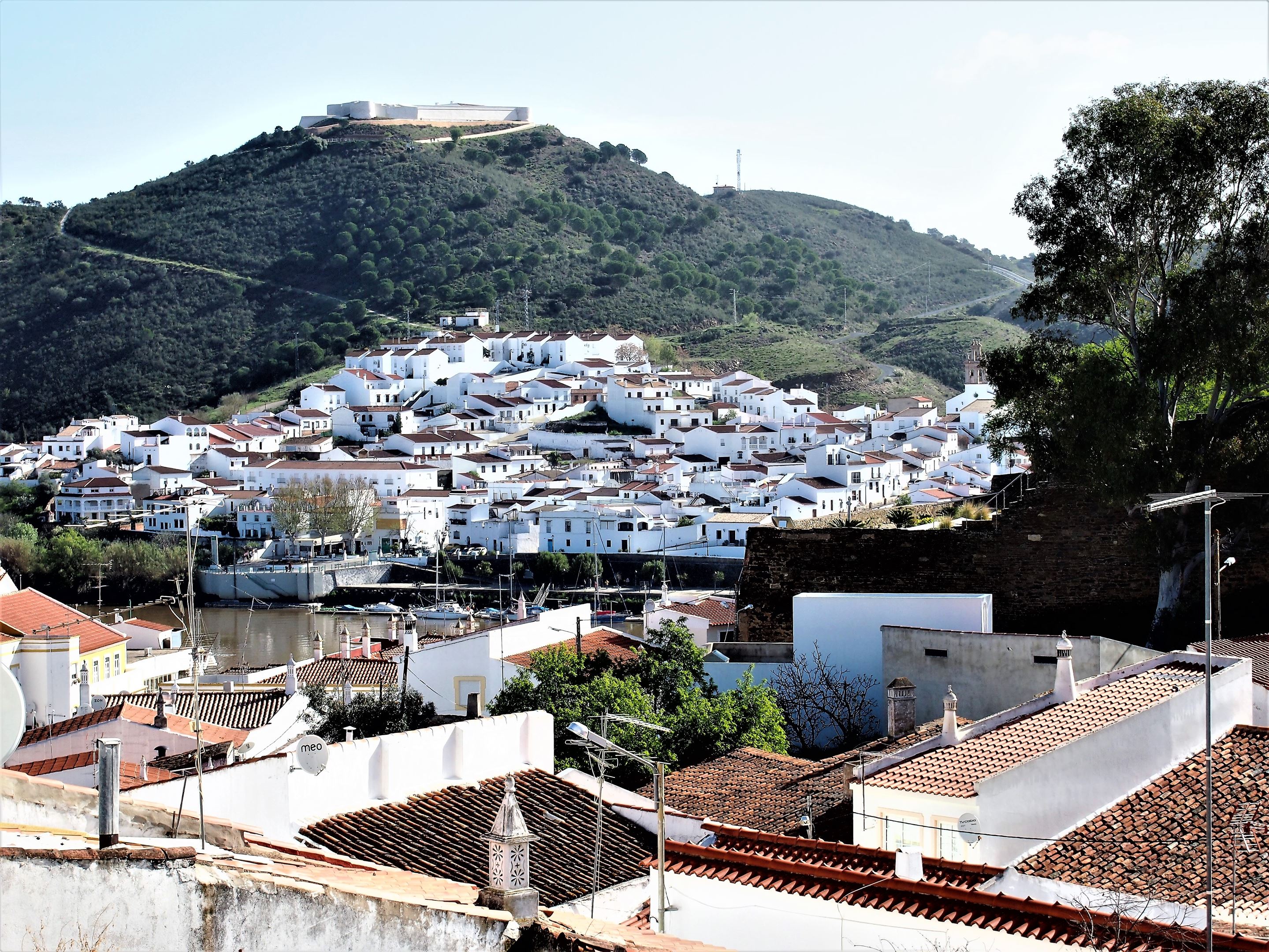 Looking across the rooftops of Alcoutim in Portugal to Sanlúcar de Guadiana in Spain with the castle at the highest point.

When I got to Alcoutim it was already lunchtime, so I went straight to Restaurante O Rio, a traditional restaurant with a small terrace overlooking the river. I ordered a veal steak and a glass of red wine. For dessert, I took the staff’s recommendation and got the homemade rice pudding. 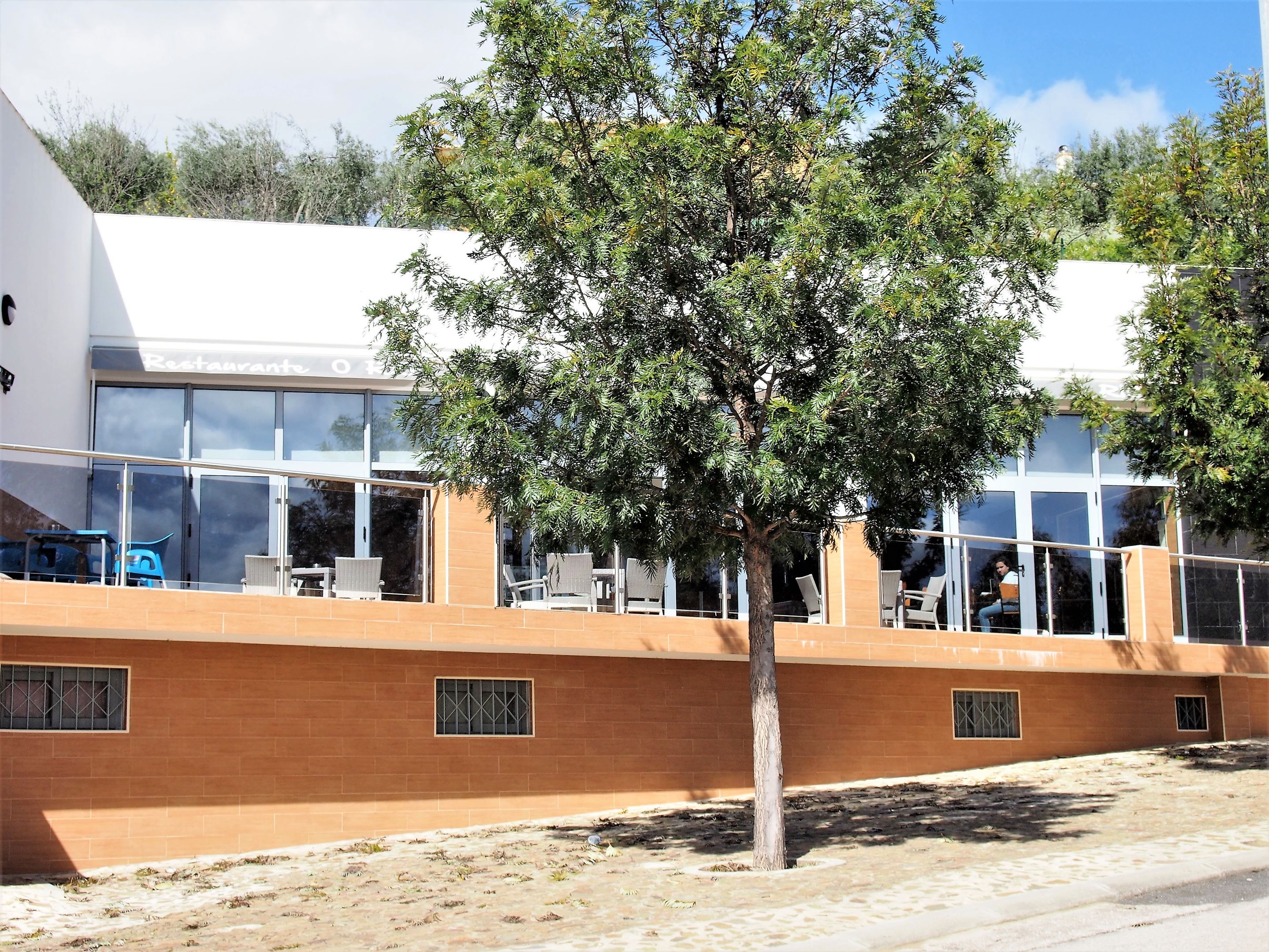 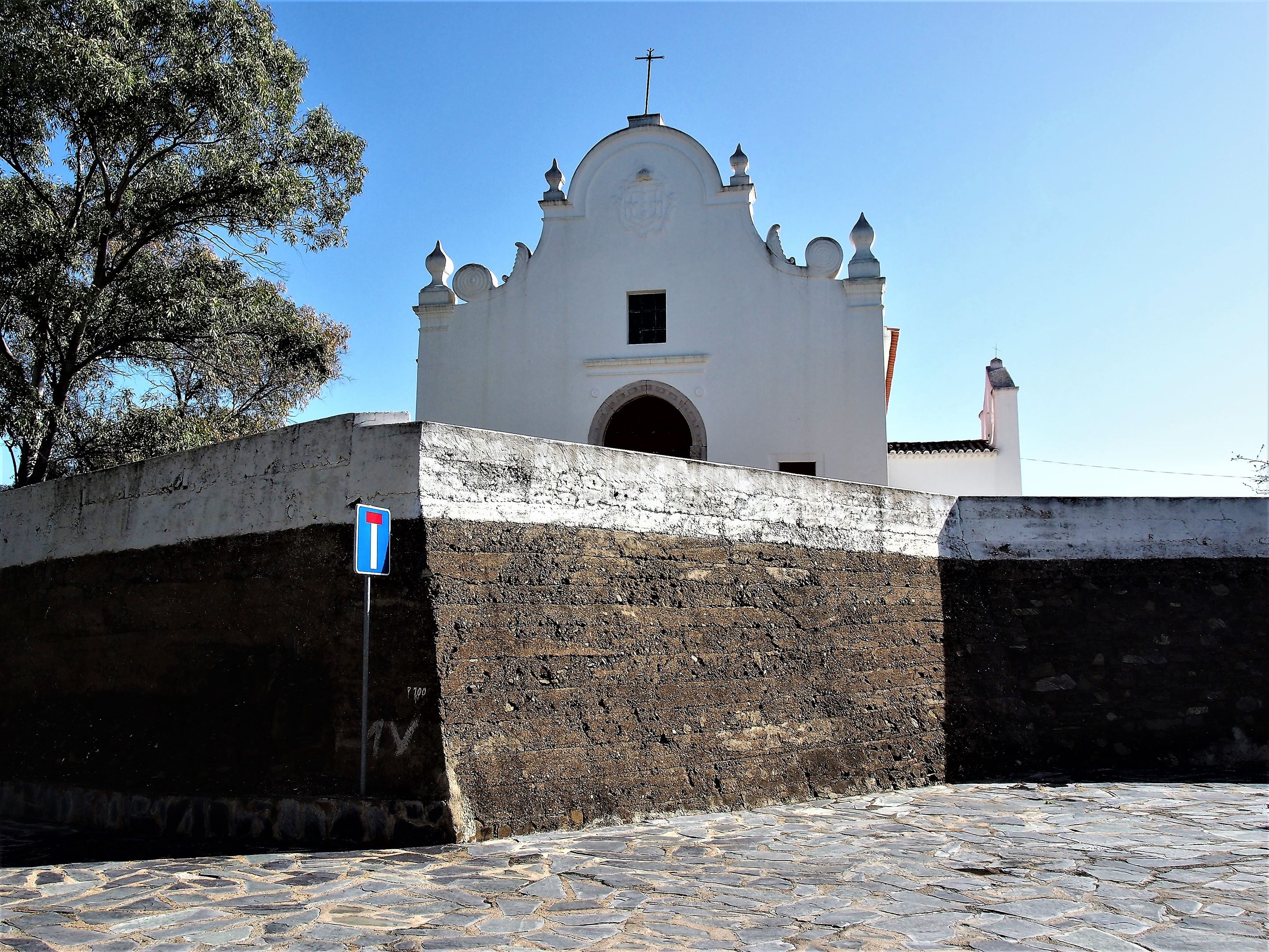 In the afternoon, I visited some of the main attractions in Alcoutim: the church, the castle and the river beach. I started at the Church of Nossa Senhora da Conceição, which was quite tiny compared to other churches around the Algarve but offered stunning views of the town.

Following the church, I drove up to the Alcoutim Castle. The castle dates back to the 14th century and was originally built to protect the border from invaders. The view from up here was as impressive as the one I had seen this morning in Sanlúcar, only this time I was looking at Spain instead of Portugal. Inside the castle, I visited the Archaeological Museum where I learned more about the history of the region and the numerous battles that were fought here in the past. 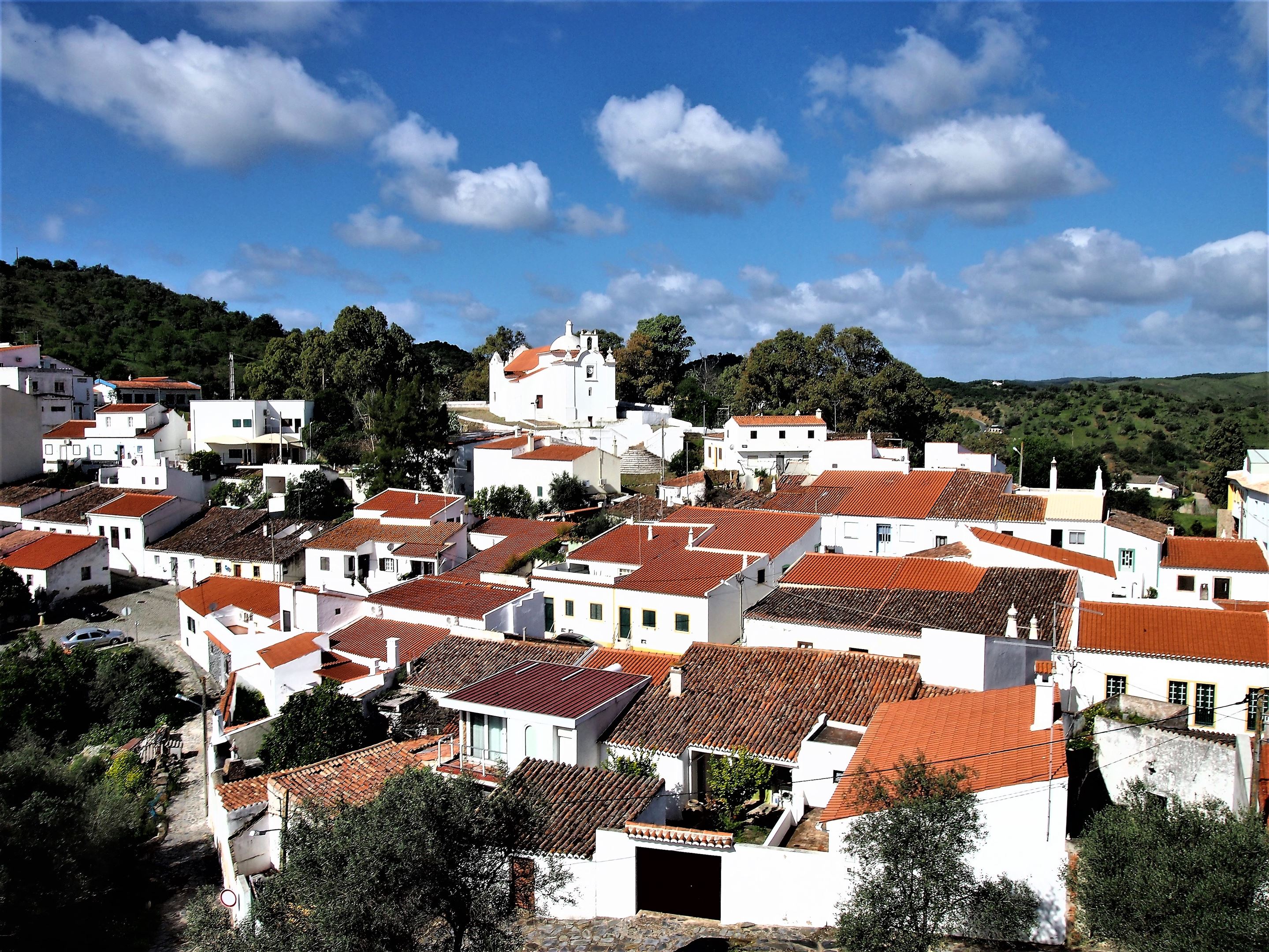 At the top of the hill in the background, the Church of Nossa Senhora da Conceição, Alcoutim 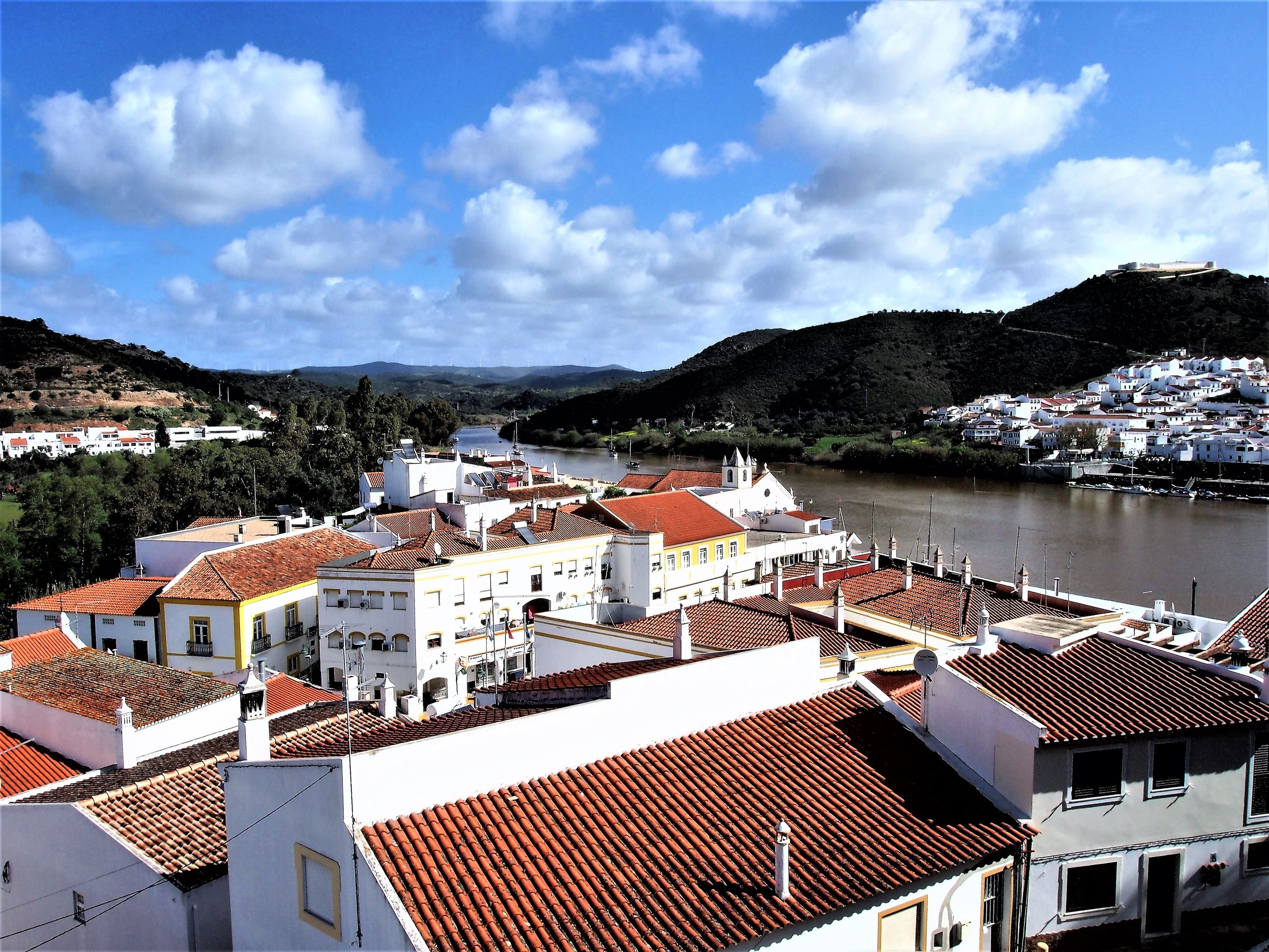 I was not expecting to find a beach in Alcoutim, but I did discover one hidden amidst the trees - Praia Fluvial do Pego Fundo. When I arrived at the beach, there was barely anyone there, just a couple of people sitting under the thatched umbrellas dotted around the sand and a few kids dipping their feet into the small river stream. There were no high cliffs, no waves, it was just trees and calm waters, a relaxing oasis compared to most beaches I’ve passed on the coast of the Algarve. The water was also surprisingly warmer than I thought, even in the middle of fall. I could definitely see myself coming back here in the summer. 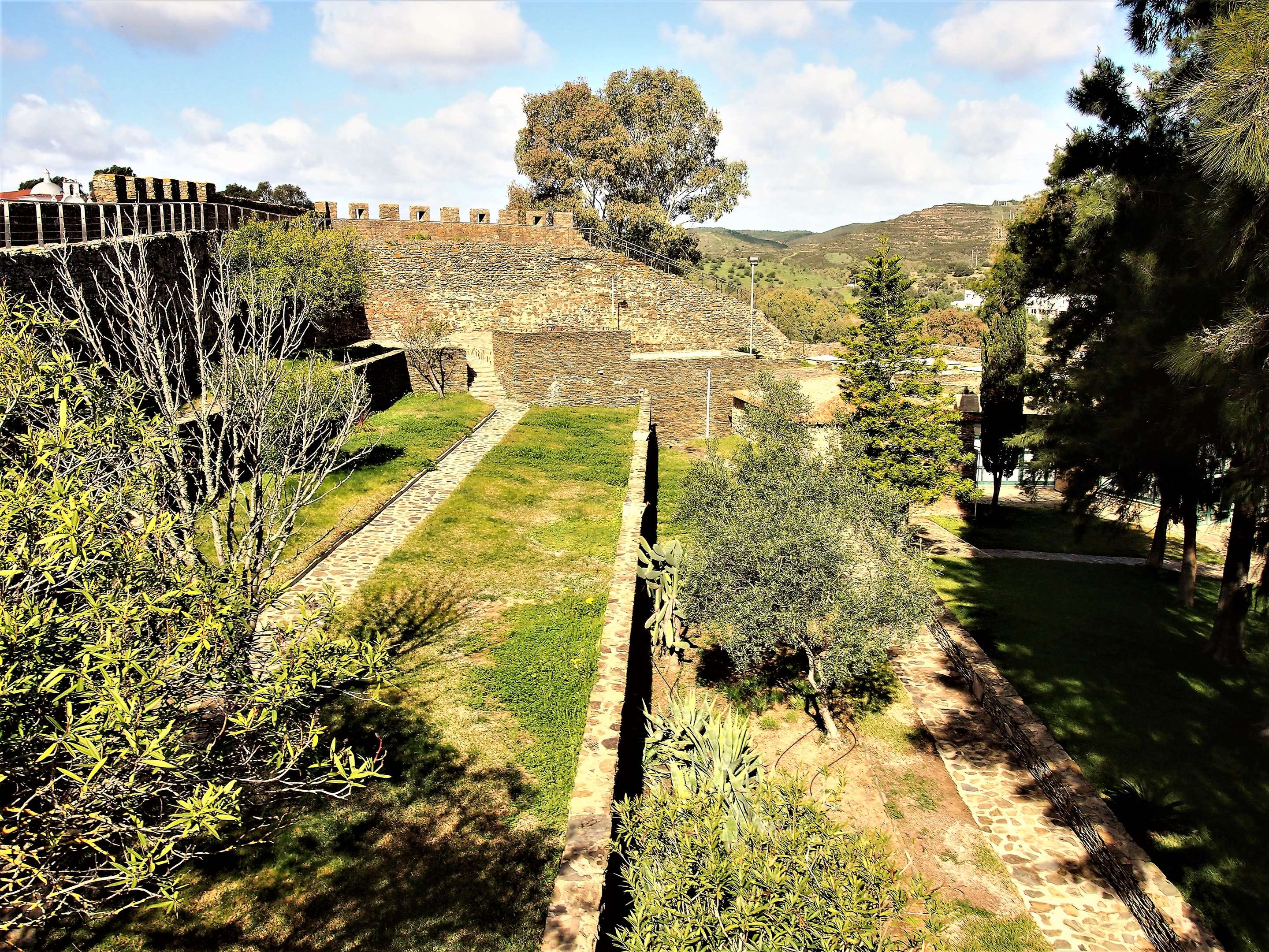 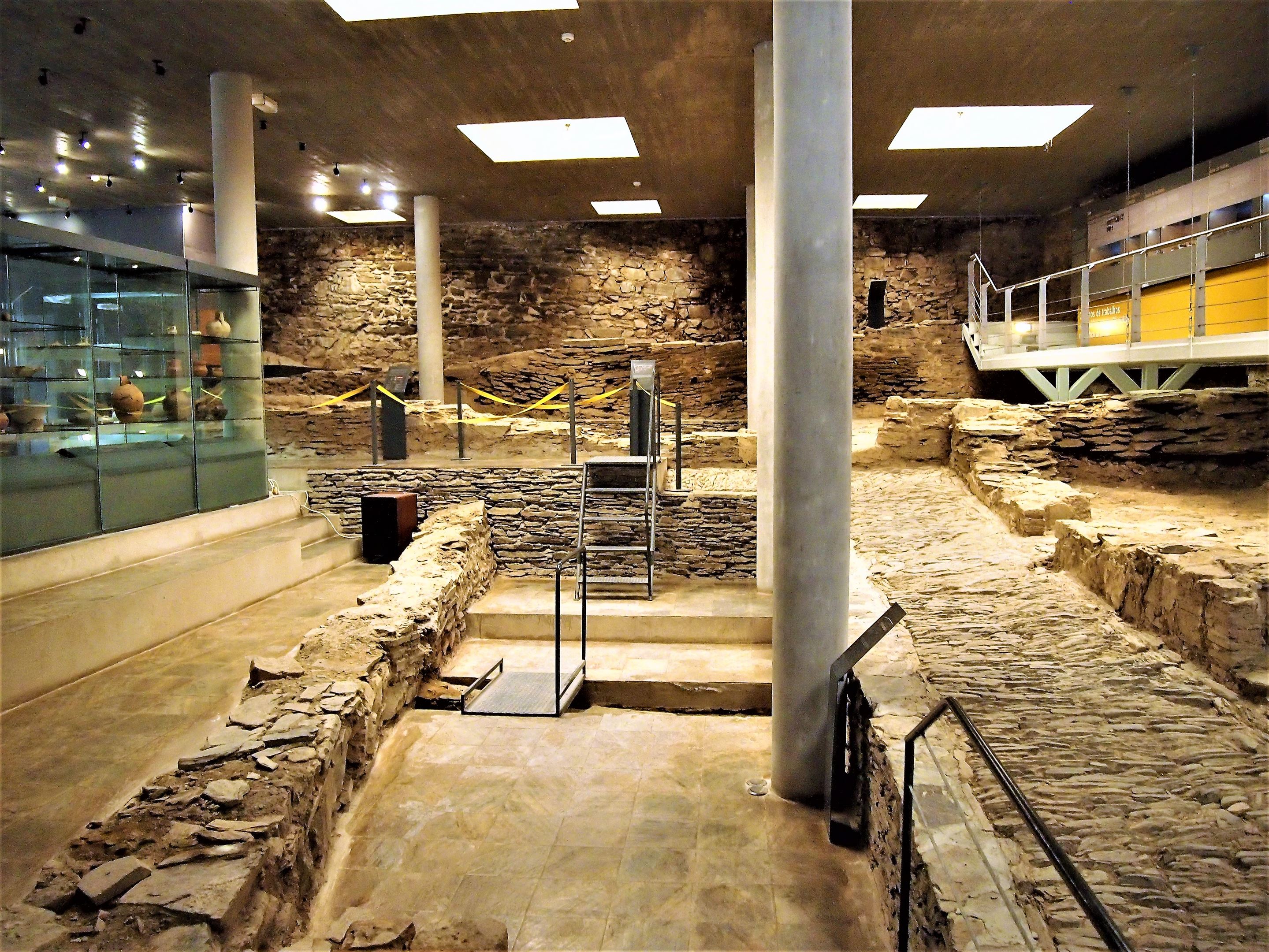 Inside the Archaeological Museum at Alcoutim Castle

I stayed at the beach for a while and then I set off to see the megalithic complex of Lavajo, which was 15 minutes away by car. I had already seen one of the menhirs at the Archaeological Museum of Alcoutim, but I was curious to see the rest in its natural setting. The two other standing stones were located on a hilltop circled by a green fence and there was a small gate on the side in case you wanted to get a bit closer. 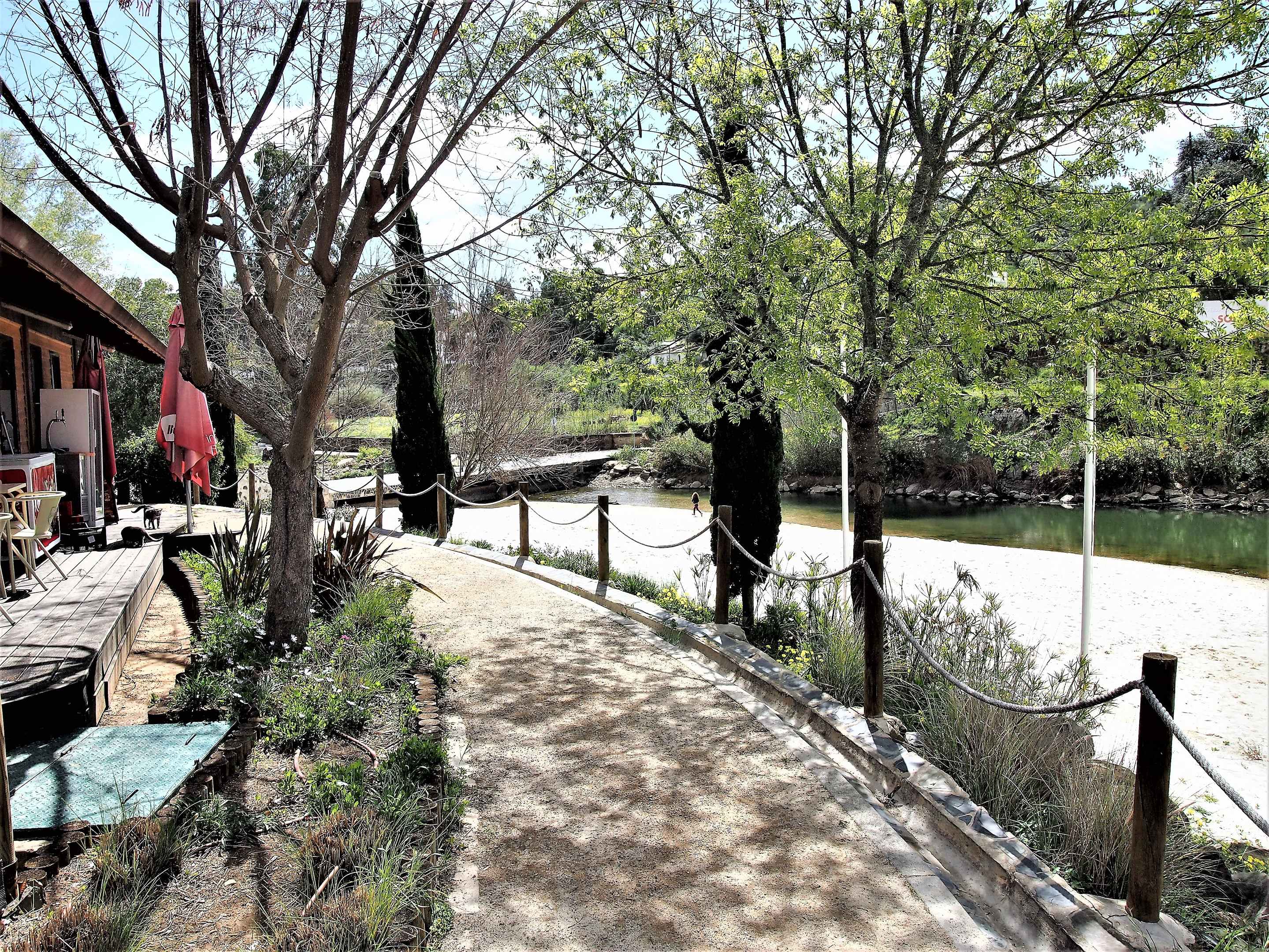 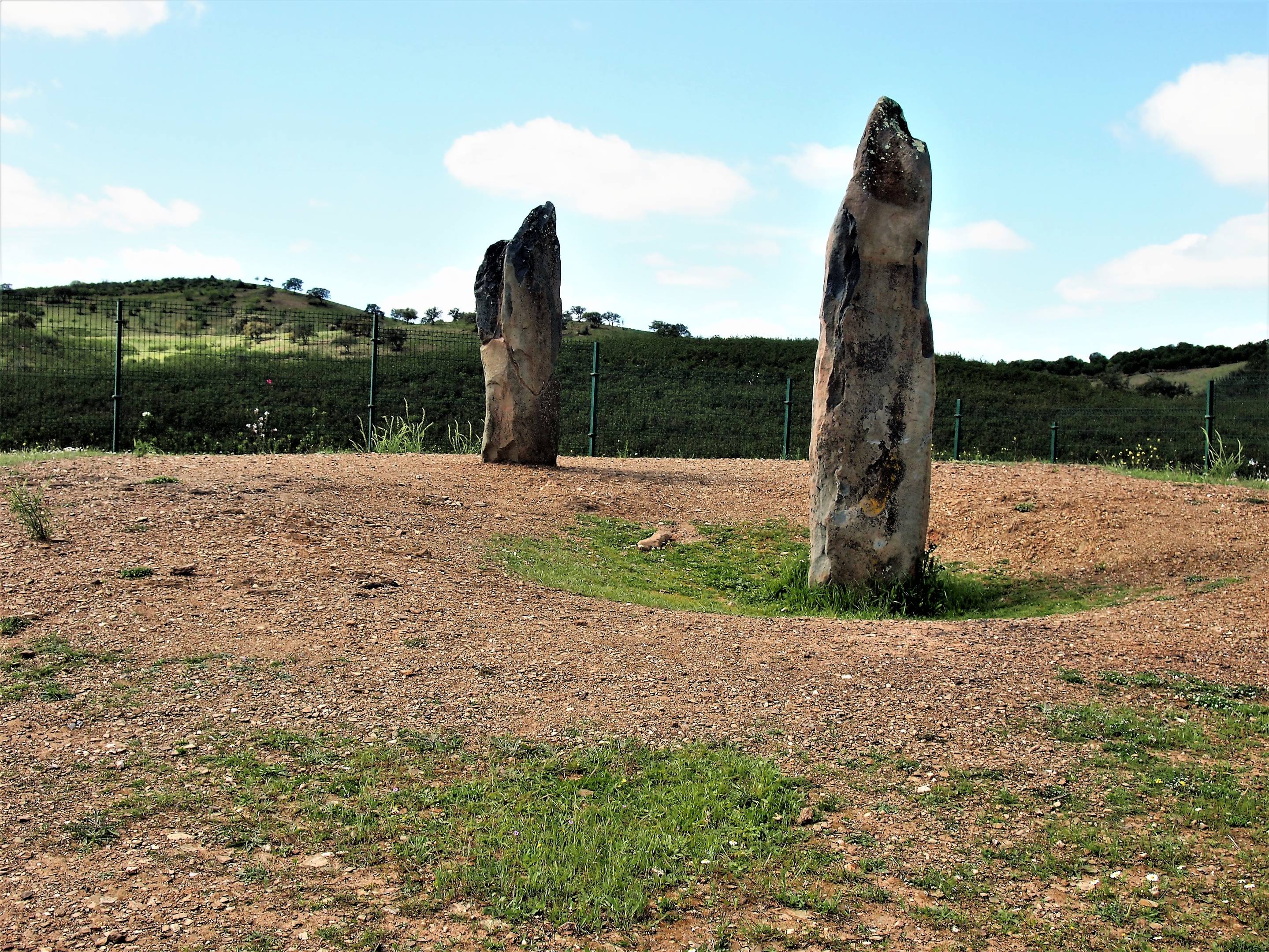 The menhirs of Lavajo - a short drive from Alcoutim, but only accessible by following a gravel track for 3km. Dated somewhere between 2800 BC and 3500 BC.

I was quite hungry by then, so I went ahead for dinner at Taberna do Ramos. The restaurant was a bit further away from the town centre, but the food was worth the ride. Located just behind a gas station, Taberna do Ramos used to be one of those places where truck drivers would stop to eat. Now, with better road connections it has become a favourite among tourists visiting Alcoutim.

I went inside and was given a table near the fireplace. The specialities here were game dishes such as fried rabbit, roasted wild boar and partridge. I had the wild boar accompanied with a salad and a tasty honey pudding to wrap it up. 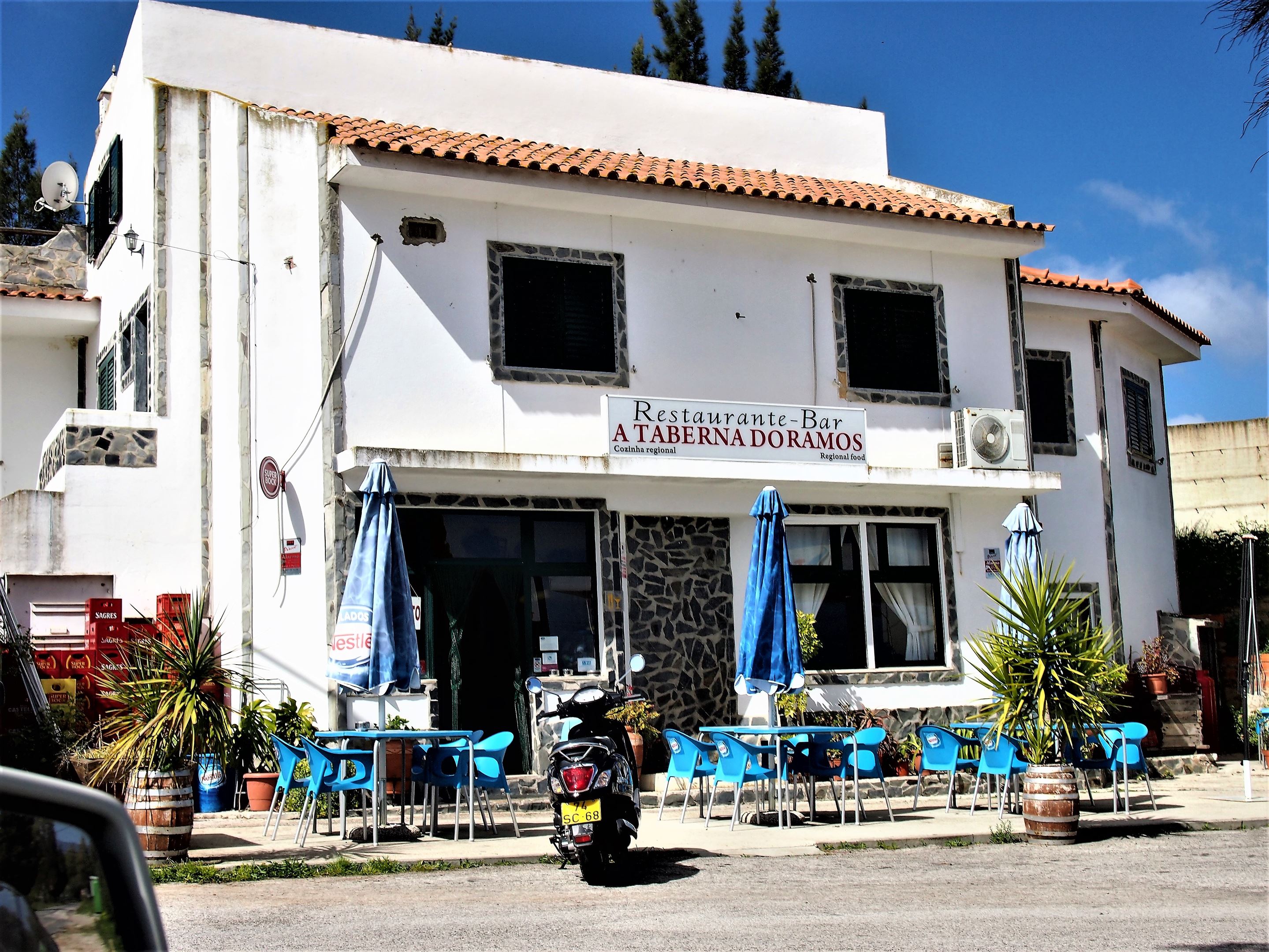 Taberna do Ramos restaurant, near Alcoutim

There aren’t that many hotels in Alcoutim, so Iberian Escapes booked me a room at Casa do Rio in Pomarão. The house was set just across the Guadiana river, surrounded by nothing else but nature - the perfect place to relax. It had 2 bedrooms and an outside terrace which provided great views of the river and the towns on the other end.

Tomorrow, I’m off to Castro Marim and from there I’ll head down to the south coast again.

Driving map for the Alcoutim tour